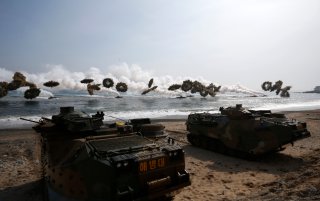 Japan is in the process of building a miniature amphibious assault vehicle (AAV) demonstrator that, if all goes according to plan, will result in a full-scale demonstrator by October of this year, Jane’s reports. The vehicle would replace the aging American-designed Assault Amphibious Vehicle.

Although the full-size demonstrator has not yet been built, Japanese engineers have created a miniature model that has been used to evaluate the vehicle’s capabilities.

The Jane’s report explains that Japan’s future AAV “will be powered by a specially built compact 3,000 [horsepower] engine that, when combined with a water-jet at the rear of the vehicle, will allow it to overcome coral reefs and steep terrain at a forward angle of up to 70 degrees.”

Inspired By the Expeditionary Fighting Vehicle

The vehicle looks somewhat similar to the Marine Corps’ earlier AAV replacement, the Expeditionary Fighting Vehicle (EFV). The EFV was an amphibious assault vehicle developed in the late 1990s and early 2000s as a replacement for the Cold War-era Assault Amphibious Vehicle.

Hope had been high for the vehicle, and the design process was equally ambitious. Based on the Marine Corps’ belief that assaults from the ocean would have to start from beyond the horizon, the EFV design prioritized speed on the water. To that end, the EFV’s massive 2,700 horsepower engine propelled the thirty-six ton vehicle to speeds of nearly thirty miles an hour.

The EFV was also up-gunned compared to the older AAV. Rather than a .50 caliber heavy machine gun and Mk 19 grenade launcher, the EFV opted for a large 30mm Mk44 Bushmaster II autocannon. This armament is similar to the main gun on the Marine Corps’ LAV 25 and is a vast increase in firepower over the AAV.

While the Marine Corps has begun fielding BAE’s Amphibious Combat Vehicle (ACV) as a replacement for the current AAV, their vehicle is substantially different than the Japanese vehicle currently in development. Crucially, this illustrates a different intent for both vehicles.

Whereas the Japanese AAV seems optimized for speed on the water, the Marine Corps vehicle prioritizes quickly fielding an off-the-shelf capability rather than a ground-up design. While this approach could field a vehicle more quickly, the end product may be less capable. Take, for example, the fact that the ACV’s speed in the water is essentially the same as the older AAV.

Until the Japanese build a full-scale demonstrator, more details remain unknown. But with a high output 3,000 horsepower engine, an aquatic bow flap, and a tracked design, Japan seems to be building their vehicle with an eye on the water.