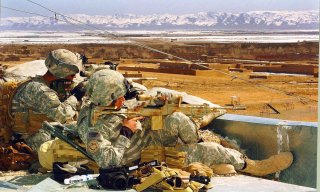 Twenty long years, tens of thousands of U.S. casualties, and over $2.2 trillion later, the U.S. military is finally pulling its forces out of Afghanistan. The U.S. military base in Kandahar, one of the largest facilities supporting the U.S. and NATO war effort, now serves as a departure point for everything from personnel and ammunition stockpiles to gym equipment and old air conditioners.

Critics of Joe Biden’s decision in Washington, DC remain vocal, putting forth a series of arguments about why a U.S. military withdrawal is wrong-headed and dangerous. Many of those arguments are increasingly desperate. Others, including the contention that the United States needs a military presence inside Afghanistan to conduct counterterrorism operations against the remnants of Al Qaeda, don’t hold up to scrutiny.

One of the chief complaints about Biden’s withdrawal order is that the Taliban, seeing the Afghan government’s most significant external supporter depart the country, will resume offensive operations and force the Afghan army to consolidate its position.

While concern over an empowered Taliban is legitimate (the movement after all, is already assaulting and in some cases capturing Afghan army positions in Ghazni province), this isn’t exactly a new development. Nor will it be remedied by keeping several thousand U.S. forces in Afghanistan. Indeed, the Taliban were able to control territory, levy taxes, produce poppy, and sustain lethal operations against the Afghan army even when 140,000 U.S. and NATO partner forces were stationed in the country. If U.S. airpower, large-scale ground operations, and an extensive network of U.S. military bases and intelligence hubs across Afghanistan couldn’t force the Taliban to capitulate or negotiate a power-sharing agreement on Kabul’s terms, simply keeping the U.S. military bogged down for another several years in pursuit of a stalemate is hardly a solution.

Extending the U.S. military presence doesn’t necessarily lead to an intra-Afghan peace agreement, either. There are those who caution that implementing a U.S. troop withdrawal will pull the rug out from whatever diplomatic process exists. But the main recommendation these same critics propose—delaying the withdrawal to some indeterminate date in the future—is more likely to result in an even more lethal civil war than the peace and prosperity the United States is working to achieve. The entire Doha process, which opened up the first direct talks between the Taliban and Kabul, rests on U.S. troops packing up and leaving. Keep those forces in the country, and the Doha process collapses. The Taliban would have no incentive in such a situation to continue diplomacy and every reason to target the Americans who remain.

Another argument against the ongoing U.S. withdrawal centers on the notion of Afghanistan returning to its previous status as a safe-haven for anti-U.S. terrorist groups like Al-Qaeda and the Islamic State. While this concern is understandable, it neglects to take into consideration just how limited many of these terrorist groups truly are.

The Al Qaeda of 2021 doesn’t possess the same capabilities, reach, or structure as the Al Qaeda of 2001. The organization has been unable to execute an attack on the U.S. homeland since 9/11—a seminal event that not only woke up the entire U.S. national security establishment to the terrorism problem, but enhanced the political will of successive U.S. administrations to take action against the threat. A combination of U.S. intelligence assets on the ground, a highly proficient and superior intelligence, surveillance and reconnaissance (ISR) network, and durable intelligence partnerships with foreign countries have allowed Washington to keep Al Qaeda in Afghanistan bottled up and focused on its own survival.

The Islamic State’s branch in Afghanistan is in even worse shape. While it has the capacity to attack soft-targets in Kabul, it remains under immense pressure from a multitude of actors in the country—most notably the Taliban, who have demonstrated no compunction in rooting out an organization it views as a challenge to its own authority. While it’s safe to assume that the United States will lose some visibility once all troops are withdrawn, the U.S. counterterrorism apparatus has ways of defending Americans without a permanent military presence in-country.

Perhaps the flimsiest of arguments in favor of keeping U.S. forces in Afghanistan is the notion that “losing Afghanistan” will be a boon to America’s competitors and adversaries. In a May 3 op-ed, Rep. Michael Waltz writes that Washington is “giving up” a strategic foothold to China's own benefit. This claim, though, is exceedingly far-fetched. How a war-wracked country that relies on foreign donors for 80 percent of its budget (and whose economy is one-third the size of North Dakota’s) can be considered a strategic bellwether for the United States is a mystery. The U.S. intelligence community certainly doesn’t think so; U.S. intelligence analysts have reportedly assessed that China would have liked nothing more than for the United States to divert resources from the Asia-Pacific to Afghanistan.

This isn’t to suggest a U.S. military withdrawal won’t have repercussions for Afghanistan. The Afghan security forces will have a difficult time holding off the Taliban without U.S. air and logistical support. The civil war will become more violent. The Afghan people will unfortunately bear much of the brunt.

But when one zooms out, the benefits of concluding a twenty-year war continue to outweigh the costs. President Biden made the critical decision to leave. Now he must continue to follow through, even as the chorus for continuing the status-quo grows louder.