Just How Dangerous Will China's 'F-15' Actually Be? 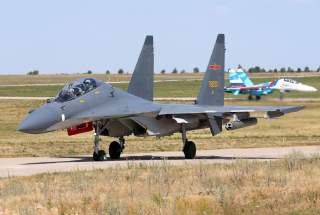 The advanced unlicensed Chinese derivative of the Russian Sukhoi Su-30MK2 Flanker-G would afford Beijing a long-range strike fighter capability similar in concept to the United States Air Force’s Boeing F-15E Strike Eagle. However, it is unclear how well the new Chinese warplanes perform compared to their Western and Russian counterparts. Beijing has thus far failed to demonstrate the ability to manufacture reliable jet engines suitable for a combat aircraft and there are questions about the quality and effectiveness of Chinese avionics and sensors.

“[The exercise] was a solid step towards comprehensive combat capability,” according to a People Liberation Army Air Force statement to the South China Morning Post.

According to the PLA, the J-16 has “greatly improved capability for electronic warfare” with its jamming suite in the basic strike fighter variant, but there is also a dedicated J-16D electronic attack variant.

The J-16 is equipped with a powerful indigenously developed phased array fire-control radar. Like its Russian counterpart, the J-16 also carries a 30mm cannon, 12 air-to-air missiles, rockets and satellite-guided bombs, and anti-ship and anti-radiation missiles. The aircraft is capable of aerial refueling using a drogue-and-probe system. The J-16 is powered by a pair of Chinese-made Shenyang Liming WS-10 Taihang, which are each allegedly capable of producing 20,050lb dry thrust each and rated at roughly 31,500lbs in full afterburner.

On paper, the J-16 is roughly comparable to the Boeing F-15E Strike Eagle or the Russian Su-30SM Flanker-H. However, as mentioned previously, the J-16 is an unlicensed development of the Su-30MK2, which is an export version of the Flanker built by the Komsomolsk-on-Amur Aircraft Plant. While the Chinese have modified the airframe and fitted the jet with a new avionics package, there are questions as to how effective the new jet will be.

The Su-30MK2 is a far less sophisticated jet than the Russian Air Force’s other multirole Flanker derivative, the Su-30SM, which is built by the Irkutsk Aviation Plant (IAP). The Su-30SM, derived from the earlier Indian Su-30MKI, is equipped with a sophisticated N011M Bars passive phased array radar and a pair of thrust vectoring AL-31FP engines, which each produce 27,557lbs of afterburning thrust. However, the Su-30SM also incorporated canards just ahead of its wings to compensate for the increased weight of the Bars radar and to restore the aircraft’s maneuverability at the cost of increased drag.

The J-16—developed from the basic Su-30MK2 airframe—does not have canards or thrust vectoring. The Su-30MK2, which has a much lighter and much less sophisticated N001V radar, did not need to incorporate canards. Nor does the Su-30MK2 incorporate thrust vectoring nozzles radar as the Su-30MKI does. Likewise, the Chinese J-16 does not incorporate canards nor does it appear to have thrust vectoring engines. Thus, it is is not clear how well the Chinese jet is compensating for the increased weight of its more sophisticated phased array radar without those features since it does not appear to incorporate the same kind of extensive airframe revisions as the Sukhoi Su-35S Flanker-E, which is built at the Komsomolsk-on-Amur Aircraft Plant.

The bigger question is the reliability of the WS-10A engine, which thus far has been unimpressive. However, considering that the WS-10 is based on technology from the CFM International (a joint between General Electric and Safran) CFM-56 commercial turbofan, there is potential in the engine’s design to be a stellar performer. That is because the CFM-56 itself was based technology from the General Electric F101, which powers the Rockwell International B-1B Lancer bomber and is the basis of the F-16 Fighting Falcon’s F110 engine. If the Chinese have managed to perfect the design and production of the WS-10A, the J-16 could eventually be a success. That would be especially true if the J-16’s avionics prove to be as capable as their Western and Russian counterparts.

The J-16 with a reliable WS-10A engine and good avionics would afford Beijing a potent long-range strike capability with a range of 2,423 miles while carrying a hefty payload of precision-guided weapons. With such as an aircraft, the PLAAF would be afforded a capable long-range strike platform that could threaten U.S. and allied forces in the Pacific theater, holding bases and other facilities at risk. That is especially true if the jet is paired with precision-guided standoff weapons. But it will be some time before the J-16 proves itself.