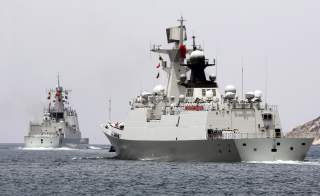 In recent days, a flotilla of Chinese People’s Liberation Army Navy (PLAN) warships set sail to the Gulf of Aden from a Chinese naval base in Qingdao, which is in the eastern part of Shandong Province.

The Chinese naval taskforce consists of a pair of Type-054A guided-missile frigates, Wuhu (Hull 539) and Handan (Hull 579), the “comprehensive supply ship” Dongpinghu (Hull 960), two ship-borne helicopters and dozens of special operations soldiers. All together, there are nearly 700 Chinese personnel involved.

While the Chinese taskforce might look unremarkable considering that this the thirtieth time that Beijing has deployed such a flotilla to the region since 2008, there is a difference this time. The presence of the Dongpinghu highlights the fact the PLAN is transitioning into a force that can operate around the globe.

“In the first four and a half years of the escort mission in the Gulf of Aden, the battleships were replaced one group after another, while the supply ships were always chosen among Weishanhu (Hull 887), Qiandaohu (Hull 886), and Qinghaihu (Hull 885),” Bei writes.

“Meaning that, the battleships withdrew after only one term of mission, while the supply ships had to sustain two terms of mission.”

With the introduction of the newer Type-903A comprehensive supply ships, starting with Taihu (Hull 889) in August 2013, the situation has started to improve for the PLAN. The PLAN’s supply vessels no longer have to undertake deployments that are twice as long as the combat vessels they escort, instead there are enough of the newer supply ships that those crews can return home with the rest of the flotilla.

Indeed, the PLAN’s underway replenishment fleet has grown rapidly in recent years. There are now ten Type-903 and Type-903A vessels serving in the Chinese fleet, according to Bei. The vessels displace 25,000 tons and are able to carry 10,500 tons fuel, 250 tons of fresh water and 680 tons of ammunition. The ships also carry four small boats, a Z-8 ship-borne helicopter and four 37mm twin-barreled cannons.

Not only are the new vessels more numerous, they are also considerably more capable than their predecessors.

“The Type-903 series supply ships have greatly improved their replenishment efficiency and are able to conduct alongside, astern, vertical, and skin-to-skin connected replenishment-at-sea at the same time,” Bei writes.

“Therefore, they can carry out underway replenishment missions under more complicated conditions.”

The Chinese fleet’s underway replenishment capability is set to further expand and improve with the introduction of the new 45,000-ton Type-901 fast combat support ship, the first of which, Hulun Lake, was commissioned into service in September 2017. A second vessel of the type is currently under construction in at the Guangzhou Shipyards.

Unlike the Type-903 class vessels, the Type-901 is a gas-turbine powered fast combat support ship that is designed to operate alongside an aircraft carrier strike group. Indeed, the vessel is designed to refuel an aircraft carrier on one side while simultaneously refueling escort vessels on the other. The ship also incorporates medical facilities and two hangars for heavy lift helicopters onboard. By some estimates, the Type-901 is comparable in capability to the U.S. Navy’s forthcoming USNS John Lewis-class (TAO-205) fleet oilers, which are set to replace the aging Henry J. Kaiser (TAO-187) class ships.

With China’s growing underway replenishment capability and capacity, Beijing will be able to undertake many more naval operations much further from Chinese shores. While combat vessels such as cruisers, destroyers and frigates often garner the lion’s share of attention, without a fleet of unglamorous supply ships and oilers, a naval force is little more than a glorified coast guard.

With its growing fleet of supply vessels, the PLAN is slowly transitioning into a global force that can project power around the world similar to the U.S. Navy. The PLAN is not quite there yet, but Beijing is certainly heading in that direction.