China Has Just Launched a New Guided-Missile Destroyer. Here's Why the Navy Should Worry. 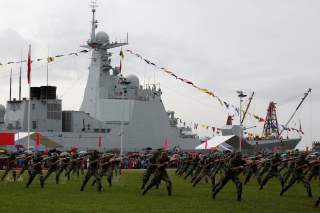 China appears to have launched another of its Aegis-type destroyers, according to satellite imagery.

The Type 052D guided-missile destroyers (DDGs) are a crucial part of Beijing’s efforts to build a blue water fleet. The lead ship of the class was first launched in 2012 and commissioned two years later.

At the time of the lead ship’s launching, Toshi Yoshihara & James R. Holmes opined: “The PLAN [People's Liberation Army Navy] may have found its premier surface combatant.” They later noted:

“The Type 052D is a stealthy, 7,500-ton, gas-turbine-driven ship boasting 64 vertical launch cells (VLS in Western parlance) and a cruising range of 4,500 nautical miles…. VLS allows for quick firing of anti-air, anti-ship, or land-attack missiles without the bother, delay, and technical headaches associated with uploading munitions onto launchers from magazines deep within the ship.”

The Type 052D’s are often called the Chinese Aegis. This is somewhat misleading. The Chinese destroyers displace about roughly 2,000 tons less than America’s Aegis-equipped Arleigh Burke-class DDGs. This limits the cruising range of the Type 052 destroyers compared to their American counterparts. This isn’t a huge issue, however, as China’s missions currently are mostly of the regional variety.

The smaller size of the Type 052Ds also means less firepower. For instance, Arleigh Burke-class DDGs have 96 VLS and Ticonderoga-class guided-missile cruisers (another Aegis ship) have 122. Still, the Type 052Ds are extremely powerful compared to other Asian navies.

Yoshiara and Holmes’ assessment of the ship is largely shared by James Fanell, the former top intelligence officer for America’s Pacific Command. “With the vertical launch system, the YJ-18 [anti-ship cruise missile], the active radar system, the Luyang III may not be equivalent to an Aegis, but it's good enough for the Chinese Navy,” Fanell said in May 2015. “I think they're pretty happy with it and that's why they're extending production of the ships — it gives them the ability to extend control beyond the first island chain.”

Indeed, production seems to be ahead of schedule. When the first Type 052D destroyer was commissioned in 2014, Western sources were predicting that China would launch 12 ships by 2018. Obviously, Beijing was overshot that number.

"The larger flight deck was likely installed to support the naval version of China’s new Harbin Z-20 or Zhi-20,” which are comparable to the U.S.-made Sikorsky UH-60 Black Hawk helicopter, he writes. The Z-20's naval variant is believed to be designed with anti-submarine warfare missions in mind.

Yoshiara and Holmes have argued that the Type 052Ds will be a “workhorse” for the PLAN, and for good reason. The vessel serves a number of different roles for the fleet in both defensive and offensive missions. For instance, Type 052Ds have been part of the carrier task force escorting China’s aircraft carrier, the Liaoning, on patrols.

The Type 052Ds can also protect other high-level surface fleets, like China’s amphibious assault ships; act independently; or serve as the lead ship in a surface action group for some missions. The missiles the destroyers are equipped to carry is emblematic of these different mission sets.

One potential mission is to provide sea-based air defense support for a PLA force trying to storm Taiwan or islands in the East or South China Seas.

It’s unclear how many of the Type 052D destroyers China plans on building as its already begun launching its successor ship, the Type 055 destroyer. That ship reportedly displaces 12,000 tons, more than the Arleigh Burke-class DDGs and Ticonderoga-class guided-missile cruisers. In fact, given the Type 055’s size, the U.S. refers to it as a cruiser. It also has a 112-cell VLS.

How Japan Could Sink China's Navy in a War: Ramjet Missiles