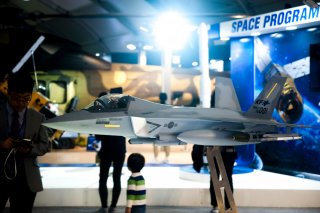 South Korea is taking new steps to build its own multi-role stealth fighter by further advancing construction of prototypes of its KF-X, a new aircraft slated to be revealed next year.

The prototype, called the Korean Fighter Experimental, is expected to make its first flight in 2022, according to a report from the Asia Times.

Citing a report from Janes, the Asia Times reports that the KF-X builders, Korea Aerospace Industries, are now “joining the fuselage section and wings.”

Interestingly, early pictures of the KF-X seem to reveal a slightly less stealthy plane than other modern stealth fighters. The first thing that sticks out is the protruding weapons pylons beneath the wings which hang missiles.  While the F-35 fighter jet operates with an internal weapons bay, the Korean stealth fighter seems to travel with external structures more detectable by enemy “radar pings,” it would seem.

The KF-X does look like it has a stealthy main fuselage, as the top looks like a smooth rounded frame, however the bottom of the plane looks decidedly less stealthy. A simple comparison to the F-35 shows considerable differences. The engine inlets appear sharper, more rectangular and external to the main fuselage; the F-35s engine inlets, while still somewhat rectangular, are blended more closely into the body of the plane. The KF-X also looks like it carries weapons underneath it, revealing shapes, contours and external structures more easily detectable.

As for reasons for this, it may simply be that South Korea has a slightly different vision for its new fighter, as it may be less likely to succeed against extremely advanced air defenses.  However, given that Korea is acquiring its own F-35, it may be that the new plane is intended to fortify, supplement or support an F-35 by offering additional attack possibilities. Perhaps the plane, being somewhat stealthy, can operate in high risk areas yet operate in more of a supportive role, at least initially.