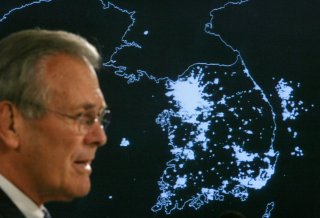 Kim Jong-un has had little time to savor his promotion to general secretary of the Workers’ Party of Korea, as if someone known as the Supreme Leader needs another title. He recently called a Politburo meeting, at which he fired several top officials, apparently in response to some sort of coronavirus incident, though the details were not revealed. This comes after his reversal of past economic liberalization and attack on the South’s cultural invasion.

We only see through a glass darkly when viewing the Democratic People’s Republic of Korea. It remains a nation sui generis, a communist monarchy that for decades made Joseph Stalin look like a liberal. Although nominally communist, nationalism prevails, with no public homage paid to Marx, Lenin, Stalin, or any other historic foreign figure. Rather, North Koreans venerate Great Leader Kim Il-sung and Dear Leader Kim Jong-il and promote Juche, or self-reliance, as their ideological mantra.

The DPRK spent decades at the ideological edge. Kim Jong-un once appeared to offer at least a bit of hope for the reform that the DPRK desperately needed. However, observers long over-analyzed his background: He received some education in Switzerland, fell in love with American basketball, and picked up an interest in Disney characters somewhere along the way. All true, but ultimately of minimal political impact.

However, as supreme leader, he pressed for greater economic openness. Markets first emerged in the North starting with the great famine under his father. “The growth of markets is the single most significant socioeconomic development to occur in North Korea over the last 20 years,” according to CSIS experts. Kim fils originally appeared even more supportive of modest market-oriented reforms. As part of the bilateral summits, the Trump administration sought to appeal to Kim by developing a video illustrating the North’s bright economic future if it surrendered its nuclear weapons and put its trust in Washington.

Alas, hope for such an outcome went a-glimmering at the failed Hanoi meeting. Since then, Kim’s interest in economic reform has waned. Whether convinced that sanctions make such a course impractical or that social consequences make marketization dangerous, he has turned inward. Policy consequently has moved sharply in reverse.

“Entrepreneurial freedoms are being curtailed,” according to The Economist. “State media and party economists have returned to the familiar old rhetoric of autarky and central control. Combined with pandemic-induced isolation, the economic effects of re-centralization are likely to be disastrous.” At the 8th Congress of the Workers’ Party of Korea in January there was “no apparent interest in reform, sanctions relief, or an opening of the economy,” according to NKNews,

This also could be an attempt to prepare for a very difficult economic time ahead with expected increasing food shortages, about which Kim convened the central committee. He even talked of facing an “arduous march,” which is how his father’s government described the famine of the late 1990s which killed hundreds of thousands of people.

Likely related is the ongoing crackdown on widespread though illicit access to South Korean culture. Expanding markets and increased foreign contact spread ideas and entertainment as well as goods. North Koreans have eagerly acquired CDs, DVDs, flash drives, and now even smaller SD cards filled with forbidden images. By all accounts, North Koreans do not spend their lives in thrall of official stories on the role of Juche. The young, especially, are much more likely to watch South Korean TV shows, sing K-pop songs, and dress like their foreign cultural idols.

Doing so now can land them in labor camps. Despite having to deal with a plethora of economic and security challenges at home and abroad, Kim has taken the lead in attacking kids’ “attire, hairstyles, speeches, behaviors,” including how North Koreans greet one another. A half dozen teens were recently imprisoned after being “found guilty of watching South Korean films and television series over the past year and sharing them with classmates.”

Indeed, the latest political demotions—which at least did not end with a firing squad composed of anti-aircraft guns as in the past!—may have had less to do with coronavirus than officially claimed. Lapses in prevention measures, the likeliest explanation of the issue, may have been used as an excuse to tighten party discipline. Opined Michael Madden of the 38 North Project: “things like this Political Bureau meeting are held to serve as a warning to North Korean elites that their behavior could endanger overall regime cohesion which would threaten their political positions and the benefits they derive from holding high office.”

Another interesting and perhaps related development was creation of the position of party general secretary, which had been left open to honor Kim Jong-il. Noting that the old first secretary position now operates as Kim Jong-un’s deputy, NKNews suggested that this might reflect planning for a succession. “It is as though North Korea suddenly introduced a close equivalent to the position of vice president,” according to the website’s director, Andrei Lankov. “This is unusual: No other ruling communist party has had a formally defined position of second-in-command—a ruler in-waiting.” Perhaps Kim’s weight loss, which has garnered world attention, reflects serious health problems. Perhaps he simply desired to create a more orderly process. Or perhaps something completely different.

All of this is occurring largely hidden from the view of the West and even China. The North’s response to the coronavirus pandemic was to essentially self-sanction, isolating the country from the world as the North emptied itself of tourists, traders, aid workers, and diplomats. With border guards ordered to shoot to kill, even smuggling with China ebbed. And there is no schedule for reopening. Indeed, there are reports that the People’s Republic of China plans to remain closed to foreign visitors next year. It would be a surprise if North Korea opened before its large neighbor.

And that might be one reason Kim has so far indicated little interest in engaging the United States. He likely hopes to enhance his leverage in any negotiations, given the allied assumption that the DPRK is in desperate straits. He also might figure that in the short-term a deal would be of little value, since his government could not take advantage of the sanctions relaxation that he desires. Better to demonstrate the North’s steadfastness under pressure and wait until sanctions relief would take practical effect.

If so, then the Moon government loses its significance in terms of dealing with Pyongyang. The Biden administration would do well to hold informal discussions with leaders in the National Assembly, which will remain under the current governing party’s control, as well as potential presidential contenders on both sides. Although the United States does not want to get involved in internal ROK politics, it should be prepared to take a coordinated approach toward North Korea after the March 2022 presidential contest.

Moreover, the administration might propose working-level intelligence discussions regarding events in the DPRK with South Korea and China. Despite obvious policy differences with the People’s Republic of China, the latter also desires a peaceful and stable peninsula. That will become an increasing challenge if the Rand Corporation and Asan Institute are correct in their estimate that the DPRK could have two hundred nuclear weapons in another half dozen years. Discussing assessments of events in the North might open the way to broader talks on objectives and potential cooperation toward arms control and denuclearization.

North Korea’s ongoing turn inward will only make a serious problem worse. Washington should continue to encourage a dialogue with the North while engaging the DPRK’s neighbors. No news is not good news when it comes to Pyongyang.

Doug Bandow is a senior fellow at the Cato Institute.  A former special assistant to President Ronald Reagan, he is the author of several books, including Tripwire: Korea and U.S. Foreign Policy in a Changed World and co-author of The Korean Conundrum: America’s Troubled Relations with North and South Korea.