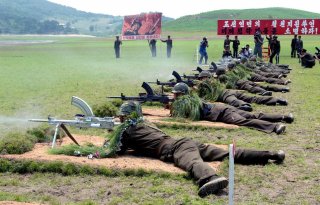 North Korea fields a dizzying number of weapons, both small arms and more complex systems like tanks and airplanes. The common thread connecting these weapons together? Almost all of them are copies of other country’s designs. Tanks? Soviet copy. Airplanes? Soviet surplus. Standard issue rifles? Soviet copy. But, one of their own indigenous inventions is a large-capacity magazine.

This helical magazine is intended for use with the North Korean Type 88, an AK-74 copy. A quick google search shows goose-stepping North Korean soldiers equipped with their unique magazine.

In addition to using captured Soviet PPsH-41s, Nazi Germany also experimented with their own high-capacity option for the iconic MP-44 submachine gun, equipping some soldiers on the Eastern Front with an odd dual-magazine setup that was an attempt to double an individual soldier’s available firepower. A common-sense goal—but the design was unreliable and prone to failure if not kept spotlessly clean. This was a difficult requirement on the Eastern Front’s notoriously muddy battlefields.

The United States Marine Corps too is reportedly developing a high-capacity magazine option for their new service rifle, the M27. The magazine would significantly increase the individual rifleman’s firepower, perhaps making up for getting rid of the Squad Automatic Weapon.

Still, the high-capacity drawbacks sometimes outweigh the benefits. The most significant drawback is reliability. Unlike traditional magazines which rely on a wire spring to keep usually 30 or so cartridges pressed toward a gun’s chamber, drum magazines have to keep anywhere from 50 or more cartridges pressed towards the chamber. Keeping this many rounds under tension requires a large spring. This increases the tension inside the magazine, and can sometimes result in jams or misfeeds, adversely harming reliability.

The Type 88’s extended magazine may hold as many as 150 rounds, though this is hard to confirm. If 150 is an accurate number, the weight of the cartridges alone, not including the weight of the all-metal magazine would be over 3.5 pounds, or over 1.6 kilograms.

As the magazine is attached to both the magazine port and to the underside of the barrel, the Type 88’s balance would shift forward. Needless to say, the magazine would make handling the Type 88 slower and more unwieldy, though accuracy during fully-automatic fire might actually improve, as the rifle barrel could experience less “climb” upward.

This odd-looking magazine seems to have been originally issued to Kim Jong-un’s personal bodyguards, who carried three magazines, one inserted in the rifle and two in reserve. That gave them an estimated total of 450 rounds of 5.45x39 ammunition, equivalent to 15 regular 30-round capacity magazines. Talk about packing a big punch.