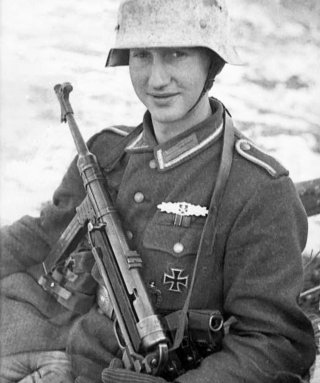 The iconic MP 40 was a German submachine gun designed in the late 1930s that built upon earlier domestic submachine gun designs. The MP 40 was a fully automatic-only weapon, meaning that single shots could not be taken unless the trigger was quickly and carefully pulled just once. The MP 40 was chambered in the ubiquitous 9x19 millimeter pistol cartridge. Though not a particularly powerful round when compared to the American .45 ACP cartridge or the Soviet 7.62x25mm, its nearly 10-inch barrel was sufficient to propel the pistol cartridge to sufficient speeds.

The MP 40 was optimized for mass-production. Rather than using many milled parts, the MP 40 used quite a few stamped parts made from sheet steel, which greatly speeded up production and reduced the weapon’s manufacturing costs. It was prized for its overall reliability and ease of use, though it was far from perfect and had several design flaws.

One of the MP 40’s issues that stands out was its magazine. The MP 40 magazine was somewhat prone to feeding failures, due to excessive friction between magazine lips and rounds ready to be chambered. Feed malfunctions could also be caused by tightly grasping the magazine as a forward grip, which could move the magazine slightly out of line with the gun’s feed and cause further feeding failures.

The MP 40 used an innovative folding stock that folded towards the lower receiver, giving the weapon a more compact profile. This aided in maneuvering the weapon in confined spaces, such as urban areas. Though compact, the folding stock was not particularly robust compared to fixed wooden stocks, or other folding wire stocks seen on some Allied weapons like the M1 carbine.

Especially on the Eastern Front, the MP 40’s 32-round magazine was at a disadvantage against the Soviet PPSh-41, which had a much higher rate of fire, and was often paired with large-capacity drum-style magazine, leaving German soldiers outgunned.

One odd-looking variant designed to address the MP 40’s low magazine capacity issue was an MP 40 that could load two magazines side-by-side. Using a simple sliding lever, the shooter could switch feeding from one magazine to the other, effectively doubling the MP 40’s capacity. This variant was manufactured only in small quantities and production discontinued, as the slide was easily jammed if not kept free of dirt and debris. The additional weight made the MP 40 unwieldy, contributing to the variant’s low production numbers.

Another variant was the MP 41, which was essentially an MP 40 upper receiver mated to an MP 28’s lower assembly. This combination gave the MP 41 a more solid wooden stock. It was never formally adopted by the German Wehrmacht, but used to equip Axis-allied Romanian troops.

During World War II, captured MP 40s were used by Allied troops and especially by resistance fighters to supplement their own home-made submachine gun designs. Thanks to high production numbers, the MP 40 was also employed after the Second World War in a number of other conflicts. Confiscated weapons were distributed among the Allies after the close of the war and spread further throughout the world, particularly to France and Britain’s colonial empires.