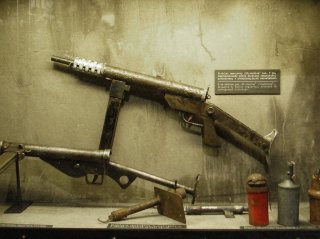 The Błyskawica, or Lightning, combined the best features of the German MP40 and the British Sten submarine guns into a single platform, built in secrecy, and tested under the streets of Warsaw.

The Błyskawica submachine gun (Błyskawica means “Lightning” in Polish) was exactly what Poland’s Home Army needed. Compact, lightweight, and reliable—and is claimed to be one of their most produced submachine guns. The name Błyskawica comes from the submachine gun’s trademark buttplate, which had three lightning bolts engraved onto it.

The Błyskawica combined several features from the British Sten submachine gun and German MP40. Like the MP40, the Błyskawica had an inward-folding stock, cutting overall length by about a third when closed. The Błyskawica’s compactness was one of its strengths—it could more easily be hidden than if it had a fixed buttstock.

Many (possibly all) Błyskawicas were designed to accept British Sten magazines, and the first five prototypes apparently used actual Sten barrels that had been airdropped into Poland. Błyskawica production was spread throughout Warsaw, usually in underground machine shops.

The Błyskawica’s parts were kept as simplistic and functional as possible. Most of the parts were made out of stamped steel or plumbing piping. The Błyskawica’s sights were admittedly rather crude, nothing more than a simple rear peephole, and a slightly pointed notch post. Some sources claim maximum effective range was 200 meters, or about 600 feet, though that figure seems overly ambitious, especially for a home-made gun. Maximum effective range was likely considerably less.

One of the other not-so-great features was the Błyskawica’s aluminum barrel jacket. A light-silver metal, aluminum is quite reflective. Without a matte finish, the Błyskawica’s barrel sleeve would likely glint, attracting unnecessary attention.

Błyskawica test firing was done in forests outside of Warsaw, though some test firing was also done in an underground shooting range built under the city. The tunnel firing range was lined with multiple layers of concrete to mask the noise caused by shooting, and test shots were done during rush hour, taking advantage of street noises to mask shots. It was chambered in the ubiquitous 9x19 millimeter round, which was readily available, as this was used in the German MP40 submachine gun.

Despite the shortcoming of the Błyskawica’s design, it was a functional weapon that took advantage of the logistical realities of the day—9x19 millimeter ammunition and Sten magazines—to create an imperfect, but workable design.