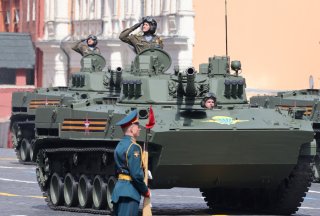 Ukrainian defense official Oleksiy Arestovych hypothesized on Thursday that Valery Gerasimov, the chief of the General Staff of the Russian Armed Forces, had been removed from his position within the last week over the Russian military’s disappointing performance in its ongoing invasion of Ukraine.

Arestovych, an adviser to Ukrainian president Volodymyr Zelensky, did not specify his source for the news about Gerasimov’s removal, claiming vaguely that it had come from “preliminary information” revealed to Ukraine’s government. Russia has not made any public comment on the alleged firing, but Western officials observed that Gerasimov had been conspicuously absent from the Kremlin’s annual Victory Day parade on May 9.

After initial progress against Ukraine from all directions, the Russian military has seen a string of military defeats and setbacks in recent weeks, forcing it to abandon its assault on Kyiv and retreat from much of north and northeast Ukraine. Aided by a consolidation of its forces in the east, Russia has continued to advance in the contested Donbas region. It has also strengthened its positions in southern Ukraine opposite the Russian-occupied Crimean Peninsula, although Ukrainian resistance has continued in the key port city of Mariupol.

Despite these meager successes, the military intervention has been broadly characterized as a failure, leading to speculation that Russian leader Vladimir Putin could launch a purge of high-ranking military officers perceived to be responsible for the lack of progress.

Russia’s failures in Ukraine have been partially attributed to logistical problems and low morale—two developments that have hindered Russian military effectiveness from the lowest ranks to the highest. At least seven, and possibly as many as ten, Russian generals have been killed during the conflict, in many cases because they moved close to the fighting in order to motivate or communicate with their troops. This rate of attrition is unparalleled in modern history; one U.S. general was killed in Afghanistan, and none were killed in Iraq.

British defense secretary Ben Wallace suggested that Putin’s incipient reorganization had also hurt the morale of Russian officers, suggesting that many were “terrified they are about to be purged and pushed out.”

“Be careful if you’re out in sole command of something in the Russian system, because it may not be for long,” Wallace added.