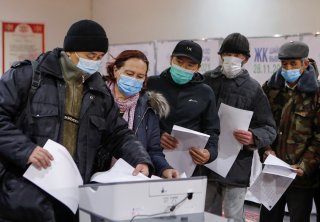 Dozens of opposition politicians in Kyrgyzstan have criticized the election the Central Asian country held on Sunday, claiming that the result, which favored parties loyal to President Sadyr Japarov, had been rigged.

Although the vote was cited as competitive by observers from the Organization for Security and Cooperation in Europe (OSCE), they also criticized the run-up to the elections, during which opposition campaigning was repeatedly disrupted and parliament’s powers were weakened in favor of the presidency. Ultimately, the official results showed voters supporting lawmakers allied to Japarov, who came to power after defeating former President Sooronbay Jeenbekov in a January election. The turnout, however, has been estimated to be below 35 percent, an indication of many Kyrgyz citizens’ disengagement from the political process.

Kyrgyzstan, a small nation in Central Asia, has endured political turmoil over the past half-decade. The country’s last three presidents have each been unseated by popular protests caused by corruption and poor economic prospects. The coronavirus has had a particularly severe impact on Kyrgyzstan, as it led to a sharp reduction in trade with China, the country’s major export partner. As winter approaches, the government is nearly bankrupt, living costs have risen, and Japarov’s popularity has flagged. The president acknowledged on Friday that an energy crisis in Kyrgyzstan could be imminent. He blamed corruption and poorly maintained equipment.

Kyrgyzstan’s last parliamentary elections, which took place in October 2020, were widely decried as fraudulent and led to a series of massive protests, ultimately resulting in Jeenbenkov’s resignation. An election held in January 2020 for his successor resulted in a landslide victory for Japarov; the president earned 79 percent of the vote, while his closest challenger earned 6 percent.

After his accession to office, Japarov launched sweeping changes, strengthening the presidency and eliminating its one-term limit. He has since launched attacks on opposition candidates; one opposition figure, Ryskeldi Mombekov, was briefly removed from the race before a popular outcry led to his reinstatement.

Most controversially, the government announced last Friday that fifteen Kyrgyz citizens had been arrested for participating in a plot to overthrow the government—although the government did not identify the captives and provided no further information on the plot.

Russia, which enjoys strong historic and political ties with Kyrgyzstan, displayed keen interest in the election’s outcome. Russian president Vladimir Putin’s relationship with Japarov has altered over time; although the Kremlin initially criticized Japarov for bringing chaos and disorder to Kyrgyzstan, the two leaders have grown closer since his consolidation of power.