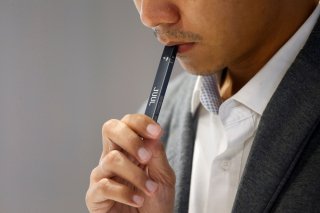 Back in November the Centers for Disease Control and Prevention announced a “breakthrough” in its investigation into the cause of what is now called EVALI (e‑cigarette vaping associated lung injury): fluid samples from patients revealed the overwhelming majority of cases were due to Vitamin E acetate, used as the solvent in THC‐​containing vaping liquids. I argued that this discovery provided yet another reason to legalize cannabis.

Because cannabis is federally banned, most THC vapers use bootleg cartridges obtained on the black market. Shortly after the discovery that inhaling Vitamin E acetate was behind the outbreak of EVALI, states where recreational marijuana is legal moved to ban use of the solvent in the manufacture of THC vaping solutions sold in legal cannabis shops. Of course, in legal markets cannabis dealers already have the incentive to make sure the vaping liquids they sell to customers is not made with Vitamin E acetate.

Shortly after the CDC announcement, Jeffrey Miron and J.J. Rich provided data showing cases of EVALI were less common in states where recreational cannabis is legal. Yesterday, researchers from Indiana University provided more supporting evidence. Reporting in JAMA, the researchers conducted a cross‐​sectional analysis at the state level plus the District of Columbia using CDC data on the number of EVALI cases for each state in 2019, in conjunction with “estimates of the prevalence of e‑cigarette use in each state in 2017 from the Behavioral Risk Factor Surveillance System, and estimates of state populations in 2017 from the Surveillance, Epidemiology, and End Results database.” They concluded:

The data suggest that EVALI cases were concentrated in states where consumers do not have legal access to recreational marijuana dispensaries. This association was not driven by state‐​level differences in e‑cigarette use, and EVALI case rates were not associated with state‐​level prevalence of e‑cigarette use. One possible inference from our results is that the presence of legal markets for marijuana has helped mitigate or may be protective against EVALI.

An editorial accompanying the paper, written by three University of Utah School of Medicine critical care specialists, drew comparisons to the alcohol prohibition era, where bootleg alcohol was often fortified with methanol to increase potency, often causing blindness and death, and where stocks of ethanol legally allowed for commercial use were denatured with benzene and other poisons—on order of the federal government—to discourage their personal recreational use. Federally‐​ordered denatured alcohol was responsible for thousands of deaths during the Prohibition Era.

U.S. policymakers are rightly focused on reducing fatalities and lung damage brought on by the COVID-19 pandemic. Hopefully before much longer, this public health crisis will pass. Unfortunately, federal cannabis prohibition will still be with us, causing its own set of lung injuries and related fatalities.