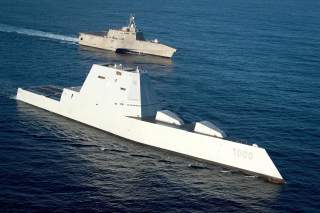 If the U.S. Navy had to refight the Battle of Leyte Gulf in contemporary times—clashing arms with a new Asian contender along Asia’s first island chain—how would it use its latest surface combatant ships to advance the cause?

To send the antagonist’s surface fleet to the bottom of the sea, one hopes. Back then the U.S. Third Fleet leadership got hoodwinked into chasing Japanese aircraft carriers with mostly empty flight decks around the open ocean. In their haste commanders neglected to bar a key passage through the Philippine archipelago, the San Bernardino Strait, to Imperial Japanese Navy (IJN) battleships and cruisers. They didn’t even keep watch.

And courted disaster. Amphibious forces on the island of Leyte and their naval protectors offshore would have paid a fearful price for the leadership’s neglect but for the heroics of navy aircrews and “tin-can” sailors. Destroyers and destroyer escorts stormed the mammoth superbattleship Yamato and its consorts when they hove over the horizon on the morning of October 25, 1944. Meanwhile warplanes swooped overhead, pelting Japanese ships with bombs, torpedoes, and machine-gun fire. The defenders’ ferocity induced the ultracautious IJN commander, Vice Admiral Takeo Kurita, to beat a retreat from Leyte Gulf in the face of vastly outgunned American forces. In other words, aviators and small-ship crews salvaged a predicament in which the amphibious host never should have found itself.

Enter USS Zumwalt, the U.S. Navy’s otherworldly-looking new guided-missile destroyer. U.S. maritime strategy vis-à-vis Communist China, today’s successor to imperial Japan, seemingly aims to bottle up China’s People’s Liberation Army (PLA) and merchant fleet within the first island chain, levying economic and military pressure on the leadership in Beijing. Built to deposit gunfire on hostile coasts in support of marines ashore, the DDG-1000 spent some years in the wilderness, looking for a mission. That’s because navy leaders pronounced its gun ammunition unaffordable after it exceeded $800,000 per (very modest-caliber) round. So much for supplying naval gunfire support in large volumes.

Yet Zumwalt packs a punch for surface warfare even with its main guns laid up, as they are now. The vessel boasts eighty Mk 57 vertical launch cells—in effect silos embedded in the hull—arrayed along the periphery of its main deck. The leadership redesignated the destroyer’s chief mission as “surface strike” a couple of years ago. In simpler language, the DDG-1000 is now a shipkiller, a capital ship in the classic mode. It is destined to fight capital ships, much as armored dreadnoughts or sail-driven ships of the line pummeled rival battle lines for oceanic supremacy in ages past. In parlance beloved of oldtimers, Zumwalt will duel enemy surface fleets for “command of the sea” rather than concentrate on exploiting maritime command after the U.S. Navy has won it.

This is fitting. Never assume what the verdict of arms will be when the foe is entitled to cast a vote. After all, there is no landing troops or answering calls for fire unless offshore waters have been cleared of hostile shipping. Such missions are among the fruits of battle, not substitutes for it. And battles first have to be won. Only after seaborne dangers are at bay will the Zumwalt crew turn gimlet eyes ashore.

This shift in primary functions, then, rebalances the fundamental premises governing the DDG-1000 class from shore bombardment to high-seas action. How, more specifically, will the vessel deploy for island-chain contingencies—for future Leytes? The basic concept underlying island-chain defense is that light, numerous forces will scatter along the first island chain, bearing the brunt of closing the straits to maritime movement. Small bodies of marines and soldiers armed with anti-ship and anti-air missiles will menace hostile ships and aircraft. Minefields, submarines, surface patrol craft, and aircraft will prowl in and above the straits, adding more obstacles to the barricade.

This adds up to a formidable deterrent. But it is a form of perimeter defense. The strategic canon teaches that a force defending a long, distended line takes on a challenge of unforeseen proportions. It demands that the perimeter’s guardians spread themselves thin. Trying to be strong at every point along a line—and recall that mathematicians define a line as infinitely many points strung together—strains the brawniest force. Even an outmatched opponent could mass its forces at some point along the line, overpower beleaguered sentries, and punch through to freedom.

That’s why martial sage Carl von Clausewitz seems to despair of this form of defense, which he terms “cordon-warfare.” This “ruinous” military method, he says, is “worthless without powerful fire to support it.” Clausewitz does hedge, however. His criticism appears to stem from the shortcomings of military technology. The effective firing range of gunnery remained short in his day, the era of the Napoleonic Wars. It covered little territory. He nonetheless suggests that gunnery can shore up defensive lines within firing range, defending “all points effectively” within reach.

Clausewitz never got a load of precision strike weaponry, which has extended the range and destructive power of fire support by orders of magnitude beyond that of Napoleonic cannon. And like all good soldiers, he was a great believer in putting terrain to work. The first island chain amounts to a line of immovable guard towers, all belonging to powers allied or friendly with the U.S. military. Geography divides up what looks on the map like a lengthy, porous frontier into a series of manageable segments. Fire support from the sentinel towers and mobile platforms coupled with obstacles strewn along the line renders the Clausewitzian critique of perimeter defense moot—in this instance at any rate.

Or if you don’t believe the greatest military strategist of all time, ask Bill Belichick, the greatest NFL coach of all time. Football is little more than mutual perimeter defense. The offense attempts to keep defenders out of the backfield, punch holes in the defense through the running or passing game, and march downfield to score. The defense replies by attempting to prevent running backs or receivers from penetrating a line backed up by a defense in depth. Coach Belichick would slaver at the idea of a New England Patriots defensive line whose linemen were—like Asian islands—impassable to the offense. Plugging the seams between the blockers while mounting a defense in depth behind the line—just in case the offense punctured it through savvy blocking or passing—would become any New England defensive scheme’s paramount goal. Easy!

Transposing the analogy back into the military realm, joint U.S. and allied forces would firm up the line with light missile-armed units, sea mines, and so forth. Together with the islands, that defensive line might well hold. But the “coaches,” U.S. and allied commanders, would still need to defend in space behind the perimeter, just in case massed PLA forces burst through the line—most likely through one of its longer segments such as the Miyako Strait south of Okinawa, a passage that’s about 150 miles wide—or vaulted over it.

That’s where Zumwalts (and other heavy combatants) come in. DDG-1000s can constitute only part of the layered defense behind the perimeter. With only three hulls in the class—which in practice means one or two ready for combat action at any time, to cover contingencies anywhere across the globe—the U.S. Navy could never mount an impermeable defense with them alone. Short of that, commanders could look to NFL defenses for inspiration. For instance, a DDG-1000 could act as a “free safety,” or last line of defense. As the name implies, the free safety roams the backfield independently, using his eyes and intuition to judge where the offense might break through the defense and rushing to points of impact.

He’s a lone wolf. He may not prevent a long yardage gain, but he could save a touchdown. Zumwalts carry a serious missile load and, with their stealth, appear well suited to the sneaky role played by a free safety. They could ply the waters well eastward of the island chain and try to turn back PLA forces that penetrate into the allied backfield.

Or a DDG-1000 could act as a “strong safety.” Strong safeties linger fairly close to the line of scrimmage, typically concentrating on the strong side—the side of the gridiron where offensive players mass, suggesting the play will go to that side. Their goal: stop the ground game before rushers gain significant yardage, or box in tight ends  to keep the offense from striding down the field through short-yardage passes. Positioning a Zumwalt close behind the island chain would alter the geometry of backfield defense, preventing a single destroyer from patrolling a major arc of the island chain—let alone the whole thing. Like an NFL strong safety, a DDG-1000 would need help from fellow strong safeties. To cover all necessary sectors it would operate in concert with DDG-51 Arleigh Burke destroyers or CG-47 Ticonderoga cruisers; with nuclear-powered attack submarines lurking in the depths; with light surface combatants such as frigates; or with unmanned craft as they join the fleet in the coming years.