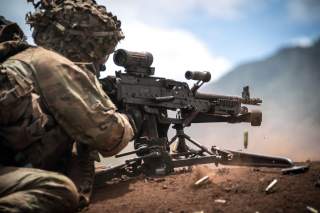 So, U.S. Special Operations Command is looking for ammunition that weighs 40 percent less than current cartridges for machine guns and rapid-fire miniguns.

The goal of the feasibility study is to assess whether it is possible to develop “belt link cartridge cases that are significantly lighter than brass cases and have increased internal volume, pressure ratings, corrosion resistance, long-term storage, and structural integrity,” according to the SOCOM research solicitation.

SOCOM has multiple questions that vendors will need to answer, such as what makes the new ammunition superior to existing cartridges made from brass.

Phase I of the project will involve devising a feasibility study to show it is possible to develop lighter ammunition. The second phase will be to prototype and demonstrate lighter 7.62-millimeter NATO and .338 Norma Magnum rounds.

Other users besides SOCOM would benefit from lighter ammunition. “This system could be used in a broad range of military applications where the weight of small arms ammunition is a critical consideration both for the operator and the logistics system,” SOCOM says. “Lighter weight saves transportation cost for military and commercial ammunition shipments.”

SOCOM has several small arms projects for its marksmen, including adopting the 6.5-millimeter Creedmore round for its sniper rifles. The goal is to double hit probability at 1,000 meters (1,093 yards) versus legacy ammunition, as well as increase effective range 40 percent, reduce wind drift by 30 percent and have less recoil. SOCOM also has its Advanced Sniper Rifle project to replace the multiple models of sniper weapons that currently equip U.S. commandos. A standardized rifle would minimize logistics and maintenance issues.

Michael Peck is a contributing writer for the National Interest. He can be found on Twitter and Facebook. This article first appeared a couple months ago.