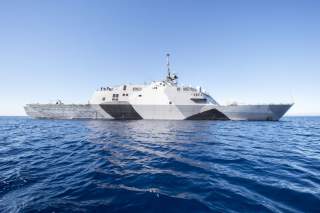 Nobody wants the Littoral Combat Ship, and yet here it is.

The USS St. Louis was launched and christened on Saturday as the latest Freedom-class installment of its Littoral Combat Ship family, the much-derided “Little Crappy Ship” that’s been plagued with so many problems that not a single one is in operational use by the U.S. Navy after 16 years in development.

Envisioned as a “relatively inexpensive surface combatant” with an advanced modular design, the Navy technically had 11 operational LCS hulls at the end of fiscal year 2017, according to the latest Congressional Research Service analysis of the line, with plans to expand the fleet to 32 vessels. But in April, the service announced that it wouldn’t deploy any of them this year despite previous plans to deploy several to join the 7th and 5th Fleets in Singapore and Bahrain, respectively.

The reasons why were clear. The Pentagon Operational Test & Evaluation office’s review of the LCS fleet published back in January 2018 revealed alarming problems with both Freedom and Independence variants of the line, including: concerning issues with combat system elements like radar, limited anti-ship missile self-defense capabilities, and a distinct lack of redundancies for vital systems necessary to reduce the chance that “a single hit will result in loss of propulsion, combat capability, and the ability to control damage and restore system operation.”

But Congress, like Congress, loves to throw money at stuff it doesn’t need. Not only is the Nav eyeing the development of the Guided Missile Frigate Replacement Program or FFG(X) to fulfill basically all the strategic roles that the LCS would have as a small surface combatant  (having opted back in 2014 to reduce the number of LCS vessels ordered from Lockheed Martin out of concern over the line’s performance), but lawmakers decided back in September to foist three more LCS hulls on the Navy while reducing funding for the modules necessary to increase the effectiveness of the current hulls.

“Congress, unhappy with the development of the modules falling behind schedule, will cut funding and cause development to fall further behind schedule, according to a source familiar with the details of the impact of the cuts who spoke on background,” as Defense News reported at the time. “All this while Congress continues to pump money into building ships without any of the mission packages having achieved what’s known as initial operating capability, meaning the equipment is ready to deploy in some capacity.”

On the upside, there was a bit of good news for the LCS this week: the USS Freedom just came back into service after two years of repairs designed to fix a critical engine failure. So there’s that, I guess.