Lost and Found: The Brits Found Their F-35 that Fell Off an Aircraft Carrier 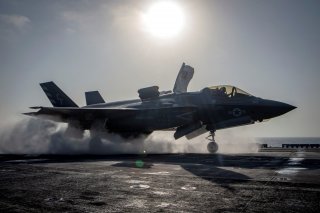 A British F-35B stealth jet that plunged off the side of a Royal Navy aircraft carrier and into the sea has reportedly been found and raised to the surface.

The warplane plunged into the sea off the deck of the HMS Queen Elizabeth, one of the British Royal Navy’s aircraft carriers, in November.

A startling video surfaced after the crash. The video’s grainy images show a British F-35B jet slowly flying upward on the ski jump ramp on the HMS Queen Elizabeth, then rapidly losing speed and tip over the bow. The pilot bails from the aircraft as the airplane descends, and his parachute reportedly snagged on the edge of the aircraft carrier, forcing him to cut loose into the water.

The British military authorities reportedly arrested the sailor who took the video, as yet unnamed, on suspicion of learning the video.

Following the incident, the Royal Navy scrambled to locate the fifth-generation fighter, fearing the aspects of its advanced stealth technology could be compromised if a foreign country located and salvaged the airplane first.

Russia topped the list of countries with both the interest and the means to recover sensitive military technology deep underwater.

British National Security Adviser Sir Stephen Lovegrove spoke to the Commons Defence Committee, highlighting the risk and explaining that “the recovery of the flight data recorder and the wreckage are really vital for an accurate investigation to determine the causes of the crash,” and to prevent unwanted, clandestine technology transfer.

Although where the airplane entered the water was known, where the F-35B jet ultimately came to rest was not, as the plane may have glided through the water significantly before hitting bottom. It was located, however, about a mile from the ocean surface. As a result, the Royal Navy asked the United States Navy and Italian Navy for assistance in raising the F-35 fighter jet, a process that was somewhat hampered by adverse weather on the surface.

What exactly caused the crash is not known for sure. However, some reports suggest that the airplane’s engine may have ingested an air intake cover, limiting the amount of air available for the engine to breathe and consequently the lift it could generate.

Though indeed not good news for the Royal Navy’s air arm, an operations or maintenance error rather than faulty equipment onboard the F-35B jet would be a more manageable issue. Still, what exactly caused the airplane to crash—pilot error, foreign object ingestion, improper maintenance—might not be made public in national security interests.