The M3 Tank Was Far from Perfect. It Was a Successful Tank Anyway. 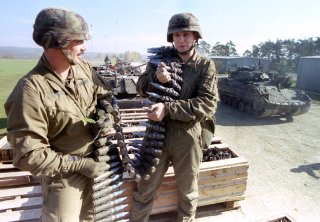 The M3 medium tank was an interim tank that addressed a significant armor capability gap in both the United States and Great Britain. Immediately pre-war, the United States possessed a rather small and underpowered tank fleet made up almost exclusively of M2 Light Tanks as well as M2 Medium Tanks. These tanks were significantly under armored and under gunned. Prompted in part by the recognition of Nazi Germany’s potent battlefield successes against France and in part thanks to German Panzer III and IV vehicles, the M3 tank was seen as an imperfect but desperately needed interim armor solution.

While the M3 tank was heavily armored for the time, the tank’s armor plating was held together using rivets, rather than welds, which tended to burst inwards and bounce around inside the tank, sometimes to deadly effect. Another of the M3 tank’s shortcomings was the tank’s off-road capability which was in no way aided by the tank’s rather smooth tracks.

The United States built two main variants of the M3 tank: the M3 Lee, which is used by American forces, and the M3 Grant, which is used by the British. The most significant difference between the two was turret design. And while both variants were quite roomy, despite having a six-man crew (Grants) or seven-man crew (Lees), this was a disadvantage, as the tanks would provide a rather large target to opposing forces.

As a part of the American Lend-Lease program of military and material aid, the Soviet Union received more than a thousand of the American-patterned M3 Lees. The tank, though desperately needed, was not universally loved.

The tank’s engine, gasoline rather than diesel-fueled, had a tendency to catch fire and did not perform as well against more advanced late-war German tanks. Thus, the push to use the M3 tank diminished greatly by the Soviet’s own and far superior T-34 tank, which the Red Army fielded in increasingly high numbers as the war in the Eastern Front progressed in the Red Army’s favor. As the T-34 became the Soviet Union’s armored vehicle of choice, the Red Army relegated their Lend-Lease M3 tanks to secondary theaters.

When the M3 tank made its combat debut, it provided a badly-needed boost in firepower, especially for the British in North Africa. And in the early years of the war, the M3 tank was an effective tank design. Once Germany began to field better armored and farther-hitting armored vehicles, however, the M3 tank moved into obsolescence.