MADL: How F-35s Talk To Each Other Is a Clear Game Changer 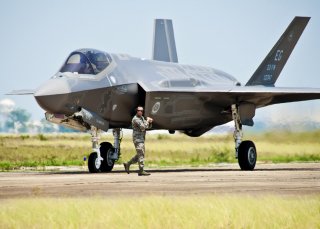 The F-35 fighter is well known for its fleet-wide, secure Multifunction Advanced Datalink (MADL), which connects many of the fifth-generation stealth fighters together. This datalink expands the type of missions that F-35 jets can conduct and enables the real-time sharing of targeting data between aircraft in warfare operations.

All About the MADL: What Is It?

MADL is essential for the growing multinational role of the F-35 program. It gives NATO and other allied countries that fly the jets an opportunity to conduct synchronized operations and explore previously unprecedented missions.

MADL, when operated in conjunction with other F-35 sensors, can achieve the much sought-after goal of sharing threat data and helping the jet find and destroy enemy targets from ranges where it remains undetected. This ability, shown in several wargames in recent years, is something that F-35 pilots point to as a defining reason for its superiority.

“Having sensor fusion and MADL (Multifunction Advanced Datalink), all of those potential dogfighting engagements can be avoided before we ever even get within visual range, let alone actually have to dogfight in the air, whatever the opponent is,” Monessa “Siren” Balzhiser, F-35 Production and Training Pilot, Lockheed Martin, told the National Interest. “The tactical scenario, more often than not, is going to be solved much further out, which is going to give us the advantage.”

It is unsurprising that the Air Force and other F-35 operating services, such as the Navy and Marine Corps, have in recent years been working on additional communications technologies for the F-35 jet to expand its operations. The MADL-like ability will be included on F-22 Raptors and fourth-generation aircraft too.

“It's not just fighting against fourth-generation threats where the F-35 stands out, but also integrating with other U.S. military platforms and other NATO platforms to meet a strategic objective,” Balzhiser said.

While MADL and the F-35 sensors and computers are, of course, fundamental to any offensive attack operation. Pilots explain that more recent innovations are increasing the jet’s ability to share information with fourth-generation fighters and even other platforms.

These efforts, ongoing now for several years, have taken many forms. For instance, the F-35 jet can now engage in two-day connectivity with F-22 Raptors using LINK 16 as a result of certain modifications. Building upon this effort, the Air Force is working with industry partner Northrop Grumman to test a new software-programmable radio prototype designed to enable F-35 jets to connect with F-22 Raptors while preserving “stealth mode.”

The Freedom 550, as its called, works by sending Internet Protocol (IP) packets of data through waveforms to transmit combat-relevant information. Colin Phan, the director of Strategy and Tech Communications for Northrop Grumman, told the National Interest earlier this year that there can be one multi-function box that does as many as twenty-five different functions. Stealth mode is sustained by using a smaller number of modules to connect the two data links together through a converter, Phan explained. Fewer modules help preserve stealthy communications by virtue of decreasing the emissions of an omnidirectional antenna which is more likely to be detected. The broader the signal and the wider the emission, the larger the potentially detectable electronic signature, something which can of course present a risk of being detected.

LINK 16 advances and the Freedom 550 radio are a few of the efforts to support the F-35 jet’s “flying computer” role as a data manager or aerial quarterback in the sky. This fortifies and improves what is already an advantage built into the F-35 jet, which is the ability to organize and streamline data to reduce the need for extraneous data exchange.

“Targeting assignments can be seen and checked by flight leads to make sure that everyone is targeting appropriately,” Chris “Worm” Spinelli, an F-35 fest pilot for Lockheed Martin, said. “There’s a vast amount of information that the jet is able to absorb, process, and present to not only the pilot in his or her aircraft but his or her wingman via datalink that significantly cuts the amount of comms required, which again, allows that pilot to become a true tactician.”