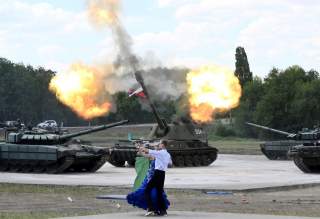 Russia’s “Ratnik” infantry modernization program has been a source of continual headlines for the last five years. Some pieces of the program have gone onto be issued and used in active service, others have fallen by the wayside.

Despite its failures, Ratnik has succeeded in modernizing the Russian Army’s average infantry gear. Gone are the old school chest rigs and harnesses. Russian infantry now sports load-bearing vests with UMBTS, the Russian designation for the MOLLE/PALS system.

Now, Ratnik-3 promises to do the same and bring Russian infantry gear up another generation. For instance, a demonstration mannequin they’ve come up with is impressive, featuring a belt-fed rifle, active camouflage, a helmet with an integrated HUD and an exoskeleton for weight bearing.

But how much of this gear is actually likely to enter service? By examining the history of the earlier Ratnik project, we might find some answers.

A look at the Ratnik system in 2013 shows a system very different from the ones issued today. There’s a thermal sight on the rifle that integrates with a flip down visor, a variety of worn electronics, and a GLONASS antenna on the left shoulder. Various power boxes and cables and control modules are draped on the soldier.

The list of systems is even more impressive. Infantry trackers and networking, integrated thermals on every helmet, and a variety of battlefield computers. A new rifle was also to be integrated with the Ratnik-1, either the A-545, or the old, angular version of the AK-12 that was far more advanced than the current AK-12.

In 2018, Ratnik kits as issued to soldiers mostly consist of new uniforms, load bearing equipment, armor, and radios. The 6Sh117 load-bearing vest, 6B45 armor, and 6B47 helmet that were part of the Ratnik system are the most visible parts of the kits—greatly modernized compared to the last generation of chest rigs, 6B23 armor, and 6B47 helmet.

It’s notable that this gear mostly brings up the standard of the Russian army to that the U.S. army was fielding in the 2000s, albeit with newer materials. The primary advance of the 6B47 helmet over the earlier 6B27 series is the addition of an integrated NVG mount in the front and rails on the sides, features that are common in the ACH and LWH helmets used by the U.S. Military.

The load-bearing systems also roughly last generation. The 6Sh117 on top of the 6B45 can roughly be compared to the use of the FLC vests on top of the IOTV armor, as was common by the U.S. Army in Iraq in the 2000s. However, the FLC has been dropped in favor of the more lightweight—albeit less modular—tactical assault panel (TAP) chest rig, which clips onto the front of the IOTV.

By and large, the only electronic components of Ratnik that got adopted are the radios and some elements of the battlefield computers. Information on these systems are less visible, but we’re not seeing soldiers out in the field in Syria with the Ratnik thermal sights, visors, or antennas on their shoulders.

The armament component of Ratnik also might be considered to be canned. Russian soldiers in 2018 in exercises and deployment still are using bog-standard AK-74M rifles. The Russian army did adopt the 1P87 reflex sight (replacing or supplementing the 1P63 sights seen in Crimea), which was part of Ratnik, but otherwise, advancements in infantry weapons have largely stalled.

Looking at Ratnik-3, the majority of the systems will likely suffer the same fate. It’s highly unlikely that the Russian military will adopt a new belt-fed weapon system as shown, or the new helmet with integrated gas mask, thermals, and HUD.
The stealth camouflage is an interesting concept, but it too is an electronic that must be mass produced. If it works, we’re likely to see it first in the hands of special forces or snipers. While not the thermal sights shown as part of Ratnik, Russian special forces and snipers in Syria have been seen with Russia-built thermal sights. Such technology could make them very lethal and hard to counter.

The armor component of Ratnik-3 is interesting. Passive exoskeletons have already seen use in Syria, albeit in not-really-combat roles: they’re used to reduce the muscle strain for sappers who are conducting minesweeping operations. The passive exoskeleton in Ratnik-3 will likely see similar use in sapper units.

Interestingly, photos of the Ratnik-3 set also show hard connections in the skeleton between the load-bearing vest and a hip belt on the soldier. The Virtus load bearing system that the British Army uses also features similar hard connections in an attempt to better distribute the load over a soldier’s body.

In the end, Ratnik-3 will likely result in the fielding of some new “soft” kit for the average soldier that improves their comfort and the general ergonomics in gear. The more advanced pieces may see use with special forces, although they may opt for different gear than that displayed. What’s highly unlikely is every Russian infantryman running around in exoskeletons with a belt fed rifle and active camouflage anytime in the next ten years.