This is the Marine Corps’ New Eyes and Ears Underwater 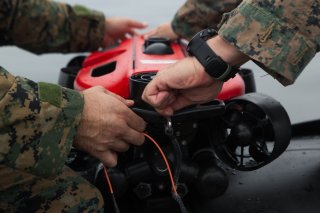 The United States Marine Corps is fielding a new underwater capability to find and neutralize underwater explosive threats. No, the Corps is not getting aboard a new kind of underwater vehicle; they are instead getting a new robot. The small torpedo-like device is a remote-controlled bomb disposal unit named the Explosive Ordnance Disposal Remotely Operated Vehicle (ROV).

Using a high-definition video camera linkup, ranging sensors, and a sounding capability, the little robot will swim ahead of explosive ordinance disposal Marines acting as their eyes and ears. “This robot gives Marines eyes in the water,” explained Master Sgt. Patrick Hilty, an Explosive Ordnance Disposal project officer in a Corps statement. “It is a capability the Marine Corps has never before had.”

The Corps statement explained that the robot could perform a wide variety of missions. For example, Marines will “leverage the ROV to search harbors before docking a Marine Expeditionary Unit ship. Operators can use it for activities in very shallow waters, conducting littoral lost object searches, damage assessments, and mine countermeasure missions.”

Rather than swimming hundreds of meters out to sea and putting themselves in close proximity to an explosive device, Marine swimmers can instead slip the little ROV into the water. Not only would Marines be farther away from danger, but they also wouldn’t be tired out from swimming. Furthermore, the little ROV can dive deeper than a Marine swimmer and stay underwater for more extended periods.

The Corps’ statement explained that the ROV is the “first increment in the Littoral Explosive Ordnance Neutralization Family of Systems. This series of robotic capabilities will allow Marines to search a wider area in the littorals, including the very shallow water, surf and beach zones.”

“LEON systems, to be fielded gradually by MCSC over the next several years, will also help the Marine Corps complement Navy EOD teams in joint operations as it strives to evolve naval force integration in the future.”

The ROV fits the Corps’ Force Design 2030, a radical restructuring that transforms the Corps from a land-based anti-insurgency force to a leaner and more decentralized — and most importantly aquatic — force. With two eyes on China and the Pacific, the ROV puts a powerful new arrow in the Corps’ quiver.

“We’re bringing the EABO (Expeditionary Advanced Base Operations) concept to the modern-day,” explained Ronald Diefenbach, a program analyst on the Explosive Hazard Team in the Corps statement. “Adhering to this concept, we can use the ROV to support Marines when operating from the littorals and while conducting island-hopping tasks.”