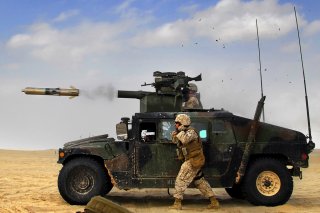 UVision, the company recently tapped by the United States Marine Corps to supply them with loitering munitions—essentially suicide drones—just showcased one configuration that the Marine Corps will use to deploy them.

The company unveiled the Marine's LAV-M, a mortar carrier variant of the 8x8 Light Armored Vehicle. The boxy, podded launcher sits atop the vehicle's rear and may swivel, with a capacity of eight missiles.

"UVision was recently awarded a contract to supply the Hero-120 aerial loitering munition and multi-canister launchers to the United States Marine Corps for its 'Organic Precision Fire Mounted' (OPF-M) program," explained Jim Truxel the CEO of UVision. "As part of this project, the MCLs will be installed on various platforms. We are proud that this latest development will be used in the field soon."

MCL is "designed for modular adaptation to various types and sizes of platform, from armored vehicles to large, medium, and small watercraft, manned or autonomous," according to the European Defense Review. Furthermore, it has the "ability to store, transport and launch the HERO loitering munition systems from a pre-loaded, sealed canister further increases battle readiness and provides the forces with available and effective missiles."

The missile is not that large. Its warhead tips the scales at just ten pounds, though its range is approximately twenty-five miles, and uses a line-of-sight datalink, though it is unclear how exactly the U.S. Marine Corps' version will differ from the company's standard offering. Increases in range and endurance are logical possibilities.

A video from UVision illustrates how exactly the loitering munitions are launched and is worth a watch.

One potential application for the munition would be as a forwardly deployed armed recon drone, capable of scouting behind enemy lines and striking targets of opportunity as they appear. Notably, the drone is recoverable, and its power system could therefore be rechargeable or replaceable and allow the missile to fly multiple times.

In a previous press statement, the company explained the missile's uses, including "pinpoint strikes against anti-armor, anti-material and anti-personnel targets including tanks, vehicles, concrete fortifications, and other soft targets in populated urban areas."

Putting a mobile anti-armor and reconnaissance capability in the Marine Corps' hands is very much in line with the Corps' 2030 Force Design. The Force Design is a roadmap for the Corps' transformation as they transition from an insurgency-focused land-based force into a highly autonomous amphibious strike force with an eye on China and the Pacific region.