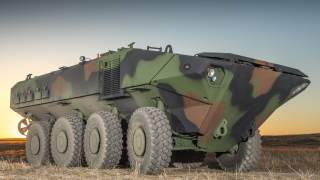 The Marine Corps is preparing to fire live weapons at its new Amphibious Combat Vehicle until the attacks achieve "total destruction," to prepare the vehicle and pave the way for long-range, high-intensity land-attack missions emerging from an amphibious assault.

The new configuration is aligned with an emerging Navy-Marine Corps amphibious assault strategy which, among other things, sees a possible need for extended penetration into land defenses after an initial beachhead is taken.

“We have an ongoing challenge in readiness, given the threats to amphibious forces,” Maj. Gen. David Coffman, Director of Naval Expeditionary Warfare, said recently at the Surface Naval Association Symposium.

The new vehicle is designed for long-range sea-land combat operations; it uses ocean water to cool the engine so as to enable it to carry up to 200 gallons of fuel - enough for a 365-mile mission. While the new ACV can travel roughly 13 miles through water, at about six knots, from ship to shore, it can hit speeds of 60mph on land for hundreds of miles inland.

Unlike existing tracked AAVs, the new ACVs are 8X8 wheeled vehicles engineered for greater speed, maneuverability and survivability on land. By removing the need for torsion bars, a wheeled-vehicle such as the ACV can build a v-shaped hull for additional protection, speed and combat durability, BAE Systems developers say.

"The Marine Corps went from tracked to wheeled because of advances in automotive technology," said John Swift, Director of Amphibious Warfare, told Warrior Maven in an interview.

The new vehicle weighs 30-tons and has a digitized driver’s instrument panel. The existing new ACVs are armed with .50-Cal Machine Guns, and engineered with an unmanned turret that can integrate a 30mm gun, should the Corps request that. It also makes use of a stronger 700hp engine, compared to the AAVs 400hp engine.

“The ACV also has the power to incorporate jammers for a complex radio suite,” Swift said.

Coffman and other senior service strategists have been refining a new strategic approach to amphibious attack aimed at leveraging 5th-Generation air support, launching more dispersed, disaggregated yet “networked” assaults and using smaller unmanned vessels to perform reconnaissance, countermine and attack missions. A more dispersed amphibious attack force not only reduces vulnerability to enemy fire but can also use advanced C4ISR and networking to better identify key points of attack across a wider area.

The emerging ACVs will launch from big-deck amphibs, called LHAs, and Amphibious Transport Docks, called LPDs. With one of the upcoming LHA America-class amphibs bringing back the well-deck, the Corps plans to emphasize ship-to-shore water-launched combat vehicles. At the same time, Navy leaders emphasize that the first two America-class amphibs, LHA 6&7, are built with an aviation emphasis to, among other things, capitalize upon the F-35B and other key air-launched elements of amphibious attack. These aviation-centric big-deck amphibs are intended to pave the way toward the upcoming LHA 8 - which brings back a well-deck.

Additional land attack firepower and survivability seem aligned with the Corps newer, more "dispersed" amphibious assault strategy; if amphibious incursions occur in narrow, more spread-apart scenarios, landing forces will potentially need to engage in more land-fighting without large numbers of forces nearby. They will likely rely more upon air support, long-range fires and "networked" intelligence from other ISR nodes, command and control ships or elements of the force - to find and exploit landing areas most advantageous the the attacking force.