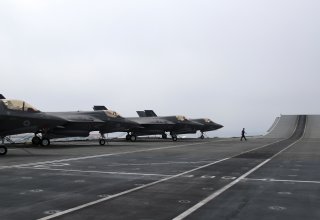 A similar cross-deck operation was conducted earlier this month, as U.S. Marines from the Wake Island Avengers were transported from HMS Queen Elizabeth to the U.S. Navy's Wasp-class amphibious assault ship USS Essex (LHD-2) to recover and refuel their F-35Bs. This was a further demonstration of the strategic importance of F-35 capable allied carriers, as well as highlighting the interoperability of the F-35B facilities among the two close naval partners.

"The fact the U.S. and the U.K. can operate their fifth-generation jets and other aircraft from the same deck at the same time is a huge strategic advantage for both countries," said Royal Navy Commodore Steve Moorhouse, Commander of the British carrier strike group. "It is a compliment that the U.S. is comfortable with the U.K. carrier strike group commanding the largest U.S. fifth-generation air wing afloat today."

According to the U.S. Navy, aircraft attached to Marine Medium Tiltrotor Squadron (VMM) 165, simultaneously landed on the Royal Navy carrier to demonstrate increased interoperability, information sharing, and expanded access across the region as allies, as well as credible and capable forces operating in the U.S. 5th Fleet area of operations.

Last month, VMFA-242, Marine Aircraft Group 12, and the 1st Marine Aircraft Wing also took part in a cross-deck operation with the Japan Maritime Self-Defense Force (JMSDF), involving the first-ever landing of the F-35B aircraft onboard the JS Izumo, the lead vessel of a class of helicopter carriers. These operations highlight how allied ships could be utilized as intermediate refueling points during a mission.

"The evolution underscored our continued effort to shift away from static, built-up airfields towards Distributed Maritime Operations (DMO),"  U.S. Marine Corps Brig. Gen. Simon Doran said in a press release. "Doing so as part of the United Kingdom Carrier Strike Group 21 strengthens our alliances and partnerships through the development of interoperable capabilities, combined operations, theater security cooperation, and capacity-building efforts."

While the origin of the term "cross-deck" or "cross-decking" remains obscure; it had historically referred to ships that were moored closely side-to-side at a dock or an anchor, where it was possible to go "across the decks" from ship-to-ship via a gangplank. In recent years, the naval jargon has come to mean the ad-hoc sharing of resources between naval vessels, notably the use of carrier decks or vessel-borne helipads to host aircraft of foreign allies.