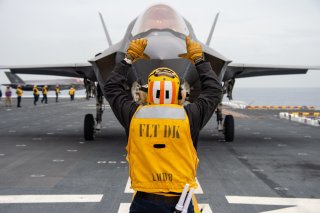 The USS Tripoli’s FTC consisted of both at-sea and in-port trials to include full power runs over the open ocean, the employment of combat systems, damage control assessments, and other elements of the ship’s crew and equipment.

While the third America-class amphibious assault ship, the now under construction USS Bougainville, brings back the classic well-deck characteristic of many big-deck amphibious assault ships, the first two seem clearly intended to optimize the increased ranges and amphibious attack variables introduced by the arrival of the F-35B fighter jet. The USS America, for instance, has already deployed carrying more than thirteen F-35Bs.

The USS Tripoli is 844 feet in length, has a displacement of approximately 44,000 long tons, and will be capable of operating at speeds of over 20 knots. Navy reports explain the USS Tripoli as a ship that incorporates a gas turbine propulsion plant, zonal electrical distribution, and electric auxiliary propulsion systems designed to be fuel-efficient.

Projecting airpower with F-35B fighter jets and Osprey Tilt-rotor aircraft introduces new tactical advantages for amphibious operations which could leverage unprecedented levels of close air support from the fifth-generation F-35. Additional Ospreys could also transport Marines to key landing zones should a beachhead be secured through an amphibious assault. The Osprey’s 450 nautical mile combat radius could enable greater standoff ranges, yet still succeed in delivering equipment, personnel, and weapons to land-based amphibious operations. An F-35B can, of course, not only bring combat power to ship-to-shore offensives but also introduce a measure of drone-like intelligence, surveillance, and reconnaissance (ISR) typically possible only with large drones. The F-35B sensor suite, particularly when combined in group formations, could massively expand the sphere of combat operations for any attack operations.