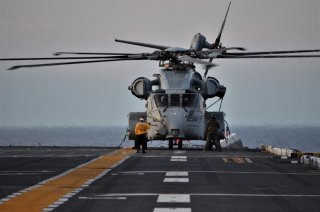 The CH-53K King Stallion lifts three times more than its predecessor and will help Marines get men and equipment from ship to shore and throughout littoral areas.

Initial operational capability is a state in which a platform is available to be deployed and maintained but has not been fully distributed to all units.

Not only is the King Stallion the Marine Corps’ largest helicopter, but it is also the largest, most powerful helicopter under the auspices of the Department of Defense. The King Stallion fits within the Marine Corps’ Force Design 2030 update by complimenting ship-to-shore connectors already in service and helping the Corps maneuver in littoral areas.

The King Stallion can maintain its high performance even in what the Marine Corps calls a “degraded aeronautical environment.” For example, the CH-53K can operate “at higher altitudes, hotter climates and carrying up to 27,000 lbs. out to 110 nautical miles; whereas, the CH-53E would be limited to a 9,628-pound external load in the same environment.”

The King Stallion’s journey hasn’t been entirely bump-free. During development, the Marine Corps found over 100 technical issues to address. One of the most significant of these was gas exhaust reingestion, which significantly degraded the helicopter’s power.

“The success to date of the CH-53K is a reflection of the hard work and effort by the Marines, sailors, and civilians at VMX-1, H-53 Program Office (PMA-261), and Marine Heavy Helicopter Squadron (HMH) 461, and the support we have received over many years from across the Department of the Navy and our industry partners,” said Lieutenant General Wise.