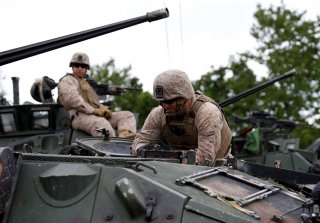 The Marine Corps badly needs a replacement for its rapidly-aging Light Armored Vehicle. Could this new vehicle be the solution?

The Marine Corps is on the hunt for a reconnaissance vehicle that would be able to replace their LAV-25, the Light Armored Vehicle that originally entered service with the Marine Corps in the early 1980s. The LAV has a lot to offer—it is amphibious, sports a 25-millimeter Bushmaster autocannon, and can transport six fully-equipped Marines in addition to three crew members. Still, the vehicle is quickly approaching forty years old, and is in some ways a throwback to Cold War-era planning.

The LAV is relatively lightly armored, and while it can offer protection from Russian 14.5-millimeter armor-piercing rounds as well as a variety of small-arms fire, it is decidedly vulnerable to larger caliber munitions. Since the LAV’s Cold War introduction it has been up-armored, though at a steep cost: its amphibious capabilities. To the Marine Corps—traditionally amphibious by nature — this is a dealbreaker.

A replacement is in the works, however: the Advanced Reconnaissance Vehicle. The Marine Corps’ ARV program seeks to find a LAV replacement, and one offering from Textron might just be the vehicle for the job.

The USMC has listed quite a few stringent program requirements for a successful Advanced Reconnaissance Vehicle prototype. The ARV should pack more firepower than the LAV, and the Corps has suggested a 30-millimeter weapon system might do the job. It should also be highly armored, able to neutralize “close-in heavy armor threats.”

In addition to a modern command and control setup as well as a variety of sensors to aid in surveillance and reconnaissance, the ARV should excel both on land as well as in the water. More specifically, it should have a shore-to-shore capability—that is, the ability to leave a naval ship and cross a littoral water zone under its own power—that does not require a connecting naval vehicle.

A variety of sensors and antennas cover the roof of the vehicles, likely as part of the USMC’s surveillance and reconnaissance requirement. And, like all things Marine, the Cottonmouth sports dual water jets at the rear is happily amphibious.

This summer, it’s likely that the Cottonmouth will undergo amphibious testing. And if the vehicle’s water trials go well, it could become the Marine Corps’ Advanced Reconnaissance Vehicle.