This Could Be the Marine Corps’ New Reconnaissance Vehicle 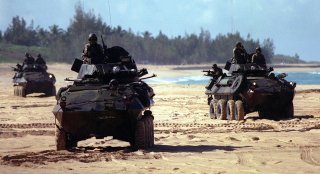 The Marine’s sturdy and long-lived LAV is retiring. Here’s what could ultimately be its replacement.

The Marine Corps is looking for a new platform to replace their aged Light Armored Vehicles. The LAV, a Cold War vehicle, has been a Marine workhorse since it was introduced into service in the early 1980s. Since then, it has been upgraded several times, with powertrain and armor protection improvements steadily integrated.

It sports a powerful 25mm main gun and has an 8x8 all-wheel-drive capability. In keeping with the Marines’ mission as an amphibious assault force, it also has a moderate swim capability, though it is not as seaworthy as the Corps’ new and larger Amphibious Combat Vehicle. Although the LAV has certainly provided the Marine Corps with a powerful armored reconnaissance capability, the platform’s end is near.

Previously, the Marine Corps has stated that it was not looking for a specific vehicle to serve in a similar role as the LAV. Instead of looking at specific platforms, the Corps stated it wanted to look at capabilities that could be called upon in a conflict.

“What it will be replaced with is not necessarily another vehicle,” U.S. Marine Lt. Gen. Eric Smith, deputy commandant for Combat Development and Integration said in a telephone interview with the Marine Corps Times. “It could be, but the capability is to also control air and ground robotics and provide reconnaissance.”

However, several companies have responded to a Department of Defense notice calling for prototypes of the Advanced Reconnaissance Vehicle. The notice describes the ARV as a “next-generation platform with a combination of capabilities that will enable Light Armored Reconnaissance (LAR) battalions to function as a battlefield manager,” and will be a “modern combat vehicle platform, with an open system architecture, and it will be capable of fighting for information dominance.”

Furthermore, the ARV will “balance competing capability demands to sense, shoot, move, communicate and remain transportable, as part of the Naval expeditionary force. The ARV PV will provide a balanced set of performance, payload, and protection attributes with sufficient size, weight, and power (SWAP) to accommodate future growth and the development of other platform variants.”

One entry competing to become the Marine Corps’ new ARV is called Cottonmouth.

Though specific specs aren’t available, the Cottonmouth is a 6-wheeled, presumably all-wheel-drive vehicle. It has a fairly squat, low profile as well as a fairly steep front to allow for smoother travel through water. It also has dual water jets at the rear, with ingress and egress presumably in front via a rear ramp or door.

Textron, the Cottonmouth’s manufacturer, says that the vehicle is intended to be a Naval Sensor Node and is also equipped with several antennas, presumably part of the vehicle’s reconnaissance and surveillance sensor array.

There are several other companies also hoping to land a prototyping contract, three of which are expected to be awarded. It remains to be seen what characteristics each prototype will have, though one thing is for certain: the LAV’s days are numbered.