Look Out: The Amphibious Combat Vehicle is (Finally) Here 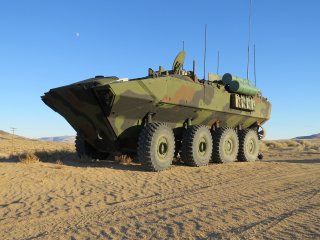 Here's What You Need To Remember: The first of the vehicles were delivered last month - but significant questions still exist about its capabilities, and to what extent it is an improvement over the Marine Corps' existing vehicle, the Assault Amphibious Vehicle (AAV).

After almost fifty years—and months of delays—the United States Marine Corps’ new Amphibious Combat Vehicle (ACV) is finally here. Previous reporting had specified a delivery date sometime in October, though that date was not met, possibly due to the ongoing coronavirus pandemic. But the first batch of vehicles is now at the Marine Corps Air Ground Combat Center Twentynine Palms. What is the ACV—and why exactly is it superior to the AAV?

The ACV, manufactured by BAE Systems, replaces the Corps’ Assault Amphibious Vehicle (AAV). Though the AAV was certainly a capable platform when initially put into Marine Corps service, it has since grown quite long in the tooth—and has been in service for nearly half a century. In order to better respond to global challenges, the USMC needed a replacement. And the ACV was the answer.

The vehicle will be the “primary means of tactical mobility for the Marine infantry battalion at sea and ashore,” a Marine Corps publication explained. “The ACV will possess ground mobility and speed similar to the M1A1 tank during sustained operations ashore and have the capability to provide organic, direct fire support to dismounted infantry in the attack. The ACV will support expeditionary mobility capability and capacity with balanced levels of performance, protection and payload.”

The ACV is not without its critics, however. Some of the more significant points that have been brought up include questions as to why the ACV is wheeled, instead of tracked, concerns that the ACV does not offer much of an improvement over the much older AAV in terms of swim speed, and that the vehicle’s endurance in the water is not commensurate with the distances the vehicle would have to swim, given the increased range of stand-off, land-based munitions it would likely be pitted against.

In a fascinating publication, the Corps used an extensive question and answer list to explain the rationale behind some of the decision-making behind the ACV. Specifically regarding the tracked vs wheeled question, superior IED protection, better mobility, and reduced fuel consumption were cited as reasons for the decision. In addition, the staggered, tranched nature of the ACV program was also explained.

Question 13, actually several questions, asked, “What is ACV 1.2? Is ACV 1.2 just ACV 1.1 with mission role variants? Is ACV 1.2 a self-deployable version of ACV 1.1?” The answer explained how that “under the planned acquisition strategy, ACV 1.2 will include the addition of command and control and a recovery and maintenance mission role variants to round out the basic capabilities required in an ACV-equipped Assault Amphibian Battalion,” with improvements incrementally integrated into the platform.

“Additional improvements in vehicle capabilities will be pursued based on the growth potential of the prototypes as demonstrated during Developmental Testing. Areas of possible growth may include carrying capacity, lethality, reliability, fuel economy and amphibious durability. The requirements for ACV 1.2 will be informed by ACV 1.1 testing.” Ultimately, the ACV 1.2 is expected to not be entirely different from the previous ACV 1.1.

The extensive Q&A page answers many other questions, and is well worth the read. Make no mistake—after nearly half a century, one of the Marine Corps’ signature pieces of equipment is being upgraded in a big way.