The Marines’ Force Design Transformation Will Go All in on Drones 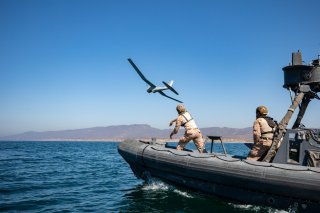 The new Marine Corps Force Design 2030 document prioritizes speed, deployability, long-range fires, and distributed operations. Yet, its transformation away from heavier, slower-moving armored forces is not intended to sacrifice or limit lethality.

While seeking to remove less mobile tanks from the force, reduce force concentrations of massing, and correlate the number of heavy aircraft, Force Design 2030 seeks to improve the Corps’ ability to close with and destroy heavily armored enemy forces.

The Corps document, written by Marine Corps Commandant Gen. David Berger in May 2022, identifies the need for Marines to operate and prevail in high-threat, close-in weapons engagement zones (WEZ). According to the document, stand-off forces and disaggregated operations bring paradigm-changing advantages to the Corps as it seeks to confront a future threat environment, but not at the expense of its ability to eliminate heavily armed enemies.

“Forces that can continue to operate inside an adversary’s long-range precision fire weapons engagement zone (WEZ) are more operationally relevant than forces which must rapidly maneuver to positions outside the WEZ in order to remain survivable,” Berger writes.

As a stand-in force of the future, the Marine Corps needs a family of unmanned aircraft systems (UAS).

To enable this stand-in force to operate within enemy fire and close to hostile forces, future Corps units will need to leverage support from a multi-domain fleet of drones.

“We need to transition from our current UAS platforms to capabilities that can operate from ship, from shore, and be able to employ both collection and lethal payloads. These future capabilities must be expeditionary and fully compatible with Navy platforms and command and control networks,” Berger writes. The Corps plan describes these systems as T-UAS, or Tactical-UAS, which will enable a “hunter” capability to track and attack enemies. The Force Design 2030 documents identify several small drones currently being developed to perform these tasks, including Black Hornet, Skydio, Puma, and Stalker drones, which are designed for an array of surveillance missions.

The concept is to enable small, mobile units to attack with an organically built-in ISR capability provided by drones. Some of these would be hand-held drones equipped with cameras to send back real-time video feeds from nearby enemy locations. This capability increases lethality, significantly improves force networking, and helps generate precision strikes in populated areas. A more dispersed but highly networked force could attack with increased survivability in close quarters while remaining undetected by hostile forces.