Ukraine’s Switchblade Drones Will Be Game Changers for Urban Combat 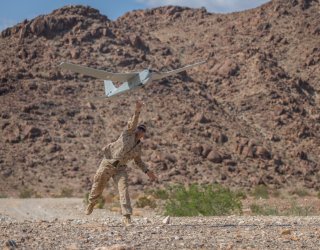 The Switchblade, built by AeroVironment, is a battery-powered unmanned aerial vehicle that can carry three pounds worth of explosives. It has cameras and can loiter as a “camera” in the sky to conduct surveillance or descend upon enemy targets and explode as an attack weapon itself.

The Pentagon plans to send 700 Switchblades to Ukraine, roughly 100 of which have already arrived, to support Ukraine’s efforts to destroy approaching Russian armored vehicles. The small mini-drone can function organically within dismounted units and fly to strike distant targets.

While a weapon such as the Switchblade could be used in open areas of eastern Ukraine, open terrain makes drones more vulnerable to detection and destruction. However, in an urban warfare environment, soldiers could launch the mini-drone explosives from concealed locations to gain a tactical advantage over armored vehicles.

The Switchblades, in conjunction with other asymmetrical or dismounted anti-armor weapons, are helping a dispersed force of Ukrainian fighters stage ambushes, hit and run attacks, and opportunistic strikes. The nature of this kind of weapon enables Ukrainian fighters to use these from hidden or obscured locations, demonstrating that well-executed tactics with anti-armor weapons can have great success against a heavier mechanized force.

Along with its ability to operate as an explosive, the Switchblades can also conduct reconnaissance missions and capture live footage of Russian troop movements or the locations of high-value targets. This is likely why the Ukrainians are also receiving hand-launched Puma drones. These small drones enable dismounted units to look on the other side of a ridge or building to see and target enemy troops. They are particularly effective when they can organically operate as part of a specific ground unit tasked with locating and attacking the enemy from dispersed, dismounted positions.

These drones support the tactics that the Ukrainians have effectively used to exact a heavy toll on incoming Russian convoys, mechanized vehicles, and armored units. While Ukrainian forces are smaller and have less armor, they have shown that a dispersed and dismounted force can use anti-armor weapons and hit and run tactics to cripple enemy advances in critical locations.

Anti-armor weapons for use against approaching mechanized units are now being supplemented by the arrival of heavier weapons and equipment from the West, which means that Ukrainian forces will be able to support their dismounted tactics with stand-off fire and heavy armor forces as well.