Heavy Fire: U.S.-Supplied Howitzers Will Pack a Punch in Ukraine 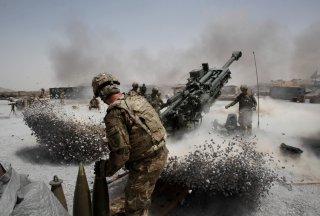 The most recent support effort, according to the Department of Defense, includes the delivery of as many as eighteen 155mm Howitzers, 200 M113 Armored Personnel Carriers, and eleven Mi-17 helicopters, along with thousands of small arms, drones, rounds of ammunition, and shoulder-fired weapons. In total, the United States has sent Ukraine more than 1,400 Stinger missiles, 5,500 Javelin anti-tank weapons, 700 Switchblade drones, and 50,000,000 rounds of ammunition.

While small arms and shoulder-fired weapons have been having a significant impact against Russian forces for quite some time now, the arrival of additional heavy platforms may introduce a new array of tactical advantages. For instance, while Javelins can destroy approaching armored vehicles in ambushes and Stingers can destroy helicopters, mobile Howitzer artillery systems could destroy Russian targets at ranges greater than thirty kilometers.

Towed Howitzers are mobile systems that can even be sling loaded and carried beneath helicopters. They can also reach higher altitudes and, depending on their technological configuration, fire GPS-guided precision rounds. The key advantage offered by the Howitzers is that they could enable Ukrainian forces to launch attacks from stand-off ranges. This means that, if empowered by the proper surveillance assets, ground-fired Howitzer artillery could target and destroy Russian launch sites, troop concentrations and convoys from range, therefore avoiding combat at shorter, more vulnerable distances.

Identifying and destroying the launch points of long-range Russian rockets could offer some small measure of hope for Ukrainian civilians being decimated by incoming Russian missiles. Should drones identify the launch sites with overhead surveillance drones and network target coordinates to Howitzer-armed ground forces, launch locations could potentially be destroyed. Concentrations of Russian forces, such as convoys, supply lines, or pockets of forces, could now be vulnerable to longer-range Ukrainian artillery fire, a tactical scenario presenting new complications for already embattled Russian forces.

However, Ukrainian fighters will need to be trained on how to use the U.S.-built M777 mobile Howitzers, which the Pentagon is prepared to quickly begin doing.

“We believe we're going to be able to start this training in the next several days. It'll be just the initial … efforts. There may be additional ones in other places and at other times but we said we knew what we needed—we said that we were going to move out quickly on this,” a senior defense official told reporters on April 18.

The artillery provided to Ukraine will consist of Army and Marine Corps Howitzers, the Pentagon said.