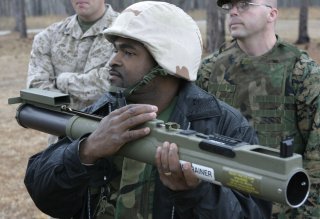 The M72 LAW has been used by the Marine Corps since the days of jungle fighting in Vietnam. In that conflict, the LAW was prized for its compactness and portability, giving grunts a portable and potent anti-armor capability.

After Vietnam, the LAW fell out of favor with the Army and Marine Corps, who turned to the larger, heavier, and more powerful AT4 or Javelin missile for fire support and an anti-tank role. However, the M72 enjoyed a new lease on life during the American campaigns in Iraq and Afghanistan. There, the LAW was again prized for its portability—depending on the variant, the launcher weighs a paltry five to eight pounds.

The dearth of armored vehicles in Afghanistan in particular allowed Soldiers and Marines to forgo the larger and heavier AT4. Instead, thanks to the M72’s low weight, individual soldiers could carry several LAWs when out on a mission compared to just one AT4. The LAW’s lower explosive power also lent itself well to urban combat operations, where low collateral damage was a mission priority.

One of the LAW’s drawbacks is the large back-blast and flash the anti-tank weapon creates when firing. The back-blast in particular can pose problems in the field—a wide berth behind must be ensured before firing, and shooting from confined spaces, like indoors, can be dangerous. The latest variant, with special-designed Fire From Enclosure (FFE) ammunition could change that.

The new LAW FFE will provide “a true Fire-from-an-Enclosure capability unlike anything the Marine Corps has ever seen,” according to a Marine Corps press release. “It will become a force multiplier.”

Two types of ammunition will be used with the improved LAW FFE, a M72A8 anti-armor round and a M72A10 multi-purpose round. The former “improves armor penetration while the multi-purpose warhead gives Marines the added capability of an anti-structure round capable of eliminating hardened structures, such as buildings.”

Addressing the aforementioned flash and back-blast drawbacks specifically, the LAW FFE will allow Soldiers and Marines to “fire several shots per day from inside a room—a capability the legacy system lacked.” In addition, the “flash from the M72 FFE’s muzzle and back blast is less than that of an M9 pistol,” when firing at night. Lastly, the improved LAW is said to incorporate a Picatinny rail for mounting laser target designators and other aiming optics, extending the LAW’s effective range.

The Marine Corps expects the LAW FFE will be ready and in service sometime in 2022—giving Soldiers and Marines a significant increase in their anti-armor capabilities. Enemies of the Republic beware.