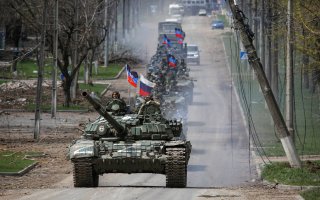 The Russian military announced a ceasefire on Monday to facilitate the evacuation of civilians from the besieged Azovstal plant in the southeastern port hub of Mariupol.

"We have just now announced a halt to combat activities in the vicinity of the Azovstal plant in Mariupol to allow the remaining civilians a exit from the combat zone," said Russian deputy foreign minister Andrey Rudenko, according to Russian state news outlet TASS. "This is a grand gesture of goodwill on our behalf,” Rudenko added. The ceasefire is set to begin at 14:00 Moscow time; Moscow did not immediately specify when the window for evacuations will close.

Ukrainian deputy prime minister Iryna Vereshchuk rebuffed Russia’s announcement on Monday, claiming that Ukraine had not agreed to the humanitarian corridor. Vereshchuk noted that Kyiv does not consider the route safe, adding that Russia has previously breached prior arrangements of a similar nature.

Russian forces stormed Mariupol in late March, seizing control of most of the city after several days of fierce urban fighting. Mariupol’s remaining defenders have holed up in the Azovstal metallurgical plant, a sprawling complex with several levels of underground corridors. Maj. Serhiy Volyna declined to share how many defenders were left during an interview last week with the Washington Post. The Russian military previously said there were 2,000 Ukrainian troops inside the factory, but that number—even if accurate at the time—is likely lower after days of Russian shelling and sporadic attempts to storm parts of the facility. Ukrainian officials say Azovstal houses as many as 1,000 local civilians, many of whom are allegedly injured.

Last week, Russian leader Vladimir Putin ordered Defense Minister Sergey Shoigu not to storm the Azovstal plant, telling the Russian military to instead opt for a blockade. “There is no need to climb into these catacombs and crawl underground through these industrial facilities,” Putin said.

But the Russian military resumed its attacks on Azovstal within days of Putin’s comments, according to Ukrainian officials. "We are taking casualties, the situation is critical... we have very many wounded men, [some] are dying, it's a difficult [situation] with guns, ammunition, food, medicines... the situation is rapidly worsening," Volyna said in an interview on Sunday.

Moscow has repeatedly claimed that any Azovstal defenders who lay down their arms will be granted safe passage out of the city. But according to previous interviews with Western media outlets, Mariupol’s remaining Ukrainian forces—composed primarily of the ultranationalist Azov Battalion—do not believe the Russian military will keep its word. The Azovstal garrison has called on the global community to oversee an “extraction” in which a third country would guarantee the safety of Ukrainian forces leaving the city. The Russian side has so far rejected all such proposals, insisting on the unconditional surrender of Ukrainian troops in Azovstal.