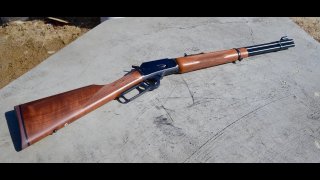 Name a product that was introduced over 125 years ago and somehow still has managed to remain a top seller in its category. Consider, too, that cars were in their infancy, airplanes weren't invented and the U.S. Army was still dressed in heavy wool blue field uniforms.

Narrowing it down a bit should help—it is a firearm, and when it comes to product longevity nothing at all compares to guns, which is why some weapons such as the Colt M1911 .45 pistol remains popular with shooters today, while militaries around the globe still use the Browning M1919 machine gun. By comparison, no one uses tanks or airplanes from the First World War, and even the B-52 Bomber has only remained in service for about sixty years.

Meet the Marlin Model 1894, a lever-action repeating rifle that was introduced six years before the twentieth century dawned and yet still was the second-highest on the list of best-selling lever-action firearms for all of last year and topped the list for the first six months of this year! For the record, one other product that has remained largely unchanged was also introduced that year—James Henry Atkinson’s “Little Nipper” mousetrap.

Both the Model 1894 and the mousetrap are examples of innovations that are simply hard to improve upon, and in the case of the former, the steady sales have been a testament to that fact. According to the NRA’s American Hunter, which tracks sales on GunBroker and other platforms the rifle, which was designed and patented by L. L. Hepburn in 1893 for Marlin, has remained a steady seller longer than just about any other firearm.

While it wasn’t the first lever-action, the Model 1894 has remained notable for its revolutionary lever-fire system with repeat-fire capability. When it was introduced it was a direct competitor of the popular Winchester 1892 pistol caliber carbine. The Marlin Model 1894 took the shooting scene by storm as it was the first lever-action repeater to incorporate a flat solid steel top receiver with side ejection of spent cartridge cases, while the design further simplified and strengthened the internal lever-action mechanism. Its design has been described as the strongest lever-action gun ever conceived, as the only substantial sidewalls that have been cut out are where it was necessary for loading and ejection.

The rifle also featured a new locking bolt and two-piece firing pin, and along with an improved one-piece trigger and short receiver, enabled cartridge compatibility with Marlin's 1888 and 1889 models. Over the years the Marlin Model 1894 has been produced in several variants and all are lever action, feature a black walnut straight grip stock.

It is currently chambered in .45 Colt and .44 Remington Magnum, and all have a ten-shot tubular magazine and a twenty-inch barrel with a 1:39-inch twist rate.

Over the years several “Limited Edition” Marlin 1894 rifles have been introduced and these have included Stainless Steel with gray, laminated furniture and “tru-glo” sights. But it is the classic versions that continue to sell even 125 years later.