Marlin 336—A Top Rifle for Seven Decades (For Many Reasons) 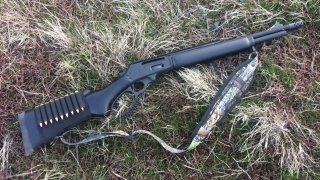 Hunters are a breed that often sticks with what they know. That’s why such iconic firearms as the Winchester Model 1894, Winchester Model 70 and Remington Model 700 remain a top choice for years and years. Ranking up there with those rifles is of course the Marlin Model 336, a rifle that has been noted for its accuracy, reliability, ease of use and, of course, its price.

It has been called the ultimate utilitarian rifle, and it is easy to see why the Marlin 336 is one of the most popular rifles on the market today, used to hunt deer, elk, bear and feral hogs. It was among the 2019’s most-popular lever action guns in terms of sales from last year according to the NRA’s American Rifleman, which is notable as it was introduced in 1948! It was the third-most-popular rifle in its category among retailers based on sales from GunBroker.com

It was a hit with hunters before the days of rock and roll and is rocking away seventy-two years later.

More Than 125 Years of Refinement

The Marlin 336 has an even longer legacy that goes back more than fifty years prior to its introduction. The lever-action rifle is a direct descendant of the company’s Model 1893, which was produced from 1893 to 1936 and based on patents of gun designer L.L. Hepburn. That model featured a new locking bolt system and a two-piece firing pin.

The Model 1893 was a popular choice with hunters for decades and was largely a direct competitor of the predominant Winchester 1894. Trying to better compete in the market the venerable workhorse, Model 1893 was updated as the Model 1936, which offered a few refinements including a solid-top receiver made of forged steel and included a side ejection for fired cartridges.

However, the Model 1936 didn’t catch on the way the Model 1893 had, so the company went back to the drawing board after the Second World War and incorporated the best of both designs, along with further refinements from Marlin employee Thomas R. Robinson, Jr. and thus was born the Model 336. It retained much of what was loved about the older rifles but was clearly a new design for the next generation of hunters, and it has been in continuous production ever since.

The side ejection has provided the rifle a decidedly modern advantage over the older lever-actions, which allow optics to be mounted. The rifles are currently available in .30-30 Winchester and .35 Remington calibers—while past versions were available in .219 Zipper, .32 Winchester Special, .375 Winchester, .38-55 Winchester and .44 Magnum. The Model 336 is available with barrel lengths of either 20- or 24-inches and feature the company’s micro-groove rifling.