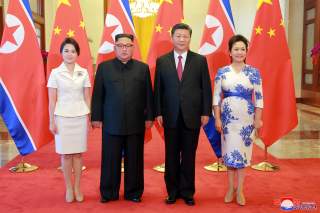 The U.S. is calling for a halt on all oil shipments to North Korea, but China and Russia appear to be pushing back.

The U.S. asserts North Korea has violated the cap imposed on the country by United Nations sanctions resolutions through secretive transfer activities at sea, presumably involving Russian and Chinese tankers. Moscow and Beijing are demanding more details on U.S. intelligence on this particular issue.

North Korean vessels were involved in at least 89 ship-to-ship transfers between Jan. 1 and May 30, illegally importing as much as three times the amount permitted by the United Nations (500,000 barrels).

“These sales and any other transfer must immediately stop since the United States believes [North Korea] has breached the … refined petroleum products quota for 2018,” the U.S. argued. Much of North Korea’s oil comes from Russia and China.

Russia told the United Nations it is “closely examining this request and is seeking additional information on every single case of ‘illegal’ transfer of petroleum,” diplomats told Reuters. China has backed that request.

As North Korea has yet to start the process of denuclearization, the U.S. is determined to maintain “maximum pressure” on the country, but Pyongyang’s international backers, namely China and Russia, are resistant. Both Moscow and Beijing have called for the relaxation of sanctions on North Korea.

“I think that it is only natural that we should be thinking about steps in that direction,” Vassily Nebenzia, Russian ambassador to the UN, argued Wednesday. China has made similar calls.

The Case for War with North Korea