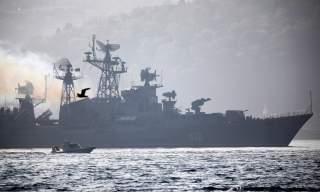 One of the most sensational naval stories of 2017 saw China’s People’s Liberation Army Navy (PLAN) sail three ships to the Baltic Sea to conduct an exercise with the Russians in Kaliningrad. It seemed to many to be another piece in the inevitable march to an anti-Western China-Russia alliance. This episode was actually only the least important part of a series of bilateral naval exercises the Chinese called “Joint Sea 2017” and the Russians “Maritime Interaction-2017.”

This year, the exercises were set to continue with “Maritime Interaction-2018.” On May 7, 2018, three Russian ships of the Pacific Fleet—two destroyers and a tanker—departed Vladivostok for a tour of East Asia to include conducting this exercise with China.

These ships sailed to Cambodia, Thailand, Vietnam, the Philippines and Japan. En route, They conducted joint naval exercises with Cambodia, Vietnam, and even U.S. ally Japan. You can follow their progress around the region on the War Vs Peace Russian naval deployments site.

However, on July 12 they returned home to Vladivostok without any further mention of “Maritime Interaction-2018” or China. The journey lasted two months, as predicted by the press releases of their departure back in May. However, there was no journey to China at least in the open sources, and it appears that China issued no statements on them throughout their journey.

It should be noted that the ships departed Manila on June 14 and then did not arrive in Maizuru, Japan, until July 5, far more than enough time to reach their destination. While afloat, they conducted an “anti-terror” exercise in the East China Sea on June 19. Originally, the Russians claimed that “Maritime Interaction-2018” would take place off the coast of Qingdao (site of the June SCO summit that had just completed) in the Yellow Sea. Part of the “Maritime Interaction-2017” exercise conducted among Russian and Chinese naval infantry near Vladivostok in September 2017 featured a prominent “anti-terror” component, suggesting the Russians simply conducted their tasks alone.

This failure to deliver a what was likely to be a fairly small, relatively simple, and straightforward international exercise more designed to signal than to actually improve interoperability represents a clear sign that the path to a China-Russia alliance is not a smooth process set in place simply by the press’ much-vaunted disagreements within the West. It remains to be proven that Russia and China are moving toward a proper military alliance or else are simply enjoying a mutually advantageous partnership in the same mold that Russia, Turkey and Iran have recently found in Syria.

Chinese President Xi Jinping made one of his grand stagecraft speeches on the need of building an “elite maritime force” on June 11 at an inspection of the PLAN Northern Theater Command, which would have been responsible for a Yellow Sea exercise. If this inspection somehow interfered with the ability to conduct a joint exercise with Russia, an unlikely but possible scenario, this would suggest an even more serious divide between the Chinese and Russian leadership.

This latter point, however, is mere speculation. More important is to note that despite whatever acrimony the U.S.-led international order may currently have nor not have, China and Russia have not coalesced into a single peer threat.

Nicholas J. Myers is a Russian and Belarusian military analyst at War Vs. Peace. You can follow him @WarVsPeaceOrg or see his research at warvspeace.org.​

Russia's Navy is Deadly (But Why Doesn’t It Have Lots of Aircraft Carriers?)