Meet the Desert Eagle: The Super Gun That Had 'Rifle' DNA 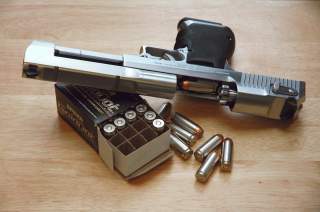 The Desert Eagle was originally produced in 1985 in .357 Magnum. The .357 Magnum version features a six-inch barrel, nine-round magazine, and Weaver-style accessory rail for mounting telescopic sights and red dot optics.