Meet the Dummy Paratroopers of D-Day 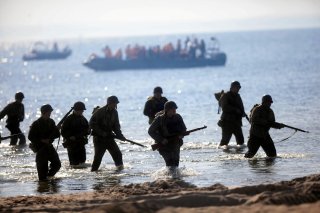 Late into the evening on the night of June 5 and into the early hours of June 6, Allied paratroopers from British 6th Airborne and American 82nd and 101st Airborne Divisions began landing throughout the Normandy region in advance of the amphibious invasion. Due to heavy enemy fire and bad weather many missed their drop zones. However, the airborne landings proved crucial to victory.

They were aided by Rupert and Oscar.

Those paratrooper units that landed in Normandy weren't the only airborne units to be dropped behind enemy lines during the D-Day operations. Miles away to the east the Germans began to hear reports of other paratroopers. However, it was part of a larger deception maneuver dubbed "Operation Titanic" and it involved the use of "paradummy" devices that were intended to imitate an airborne assault.

This caused the Germans to shift their forces away from the actual landing zones, but as importantly away from the beaches. The Germans had long assumed that Allied landings would come at Pas de Calais, the coastal city that was only about 20 miles across the channel from southeast England, and efforts were made to convince them that the attack on Normandy was actually just a deception exercise.

Dropping the dummy paratroopers was meant to further confuse the Germans, who had also used rudimentary decoys during their paratrooper drops in the Netherlands in 1940.

The British developed the first paradummies and called them "Rupert." These were little more than a burlap form that was stuffed with hay and shaped to look like a soldier, but just three feet tall. The American's – who nicknamed their paradummy "Oscar" – conducted a field test that showed that the actual proportions of the dummies couldn't be perceived by the enemy because of the absence of background. With no standard of comparison to those on the ground, it looked like a regular soldier was dropping in!

Reportedly, the American version featured a rubber head and rubber boots, but it is likely these were a training tool used to conduct the drops to determine how convincing Rubert/Oscar needed to be. Given that all of the paradummies were dropped at night it wouldn't have been unnecessary for them to have much more than the shape of a body falling from the sky.

About 500 of the fake cloth dolls were attached to parachutes and dropped in four different locations all over Normandy. While the paradummies couldn't lose their lives, the mission was not without actual danger to the aircrews and actual special operators. The drops were carried out by the Royal Air Force and Special Air Service (SAS), and involved a force of 40 aircraft including Hudsons, Halifaxes and Stirlings. Two of the Stirlings and their crews were lost in the operation.

Rupert wasn't able to fire back at the enemy, but each decoy was equipped with an explosive charge that would go off on landing and set the dummy on fire to prevent the enemy from discovering it was a deception. In the movie The Longest Day it was even suggested that the dummies were equipped to simulate gunfire when landing – but in actuality, it was the SAS men who landed behind the German lines that made the real noise. They played recordings of soldiers marching, yelling and even gunfire to lure Germans to the faux drop zones. Due to the use of Rupert and the SAS, key German units were moved away from Omaha and Gold beaches and even the 101st Airborne Division's real drop zones.

Eight SAS troops were either killed in action or later executed by the Germans.

Because the dummies were meant to explode when hitting the ground few survived – and add to the fact that a three-foot-tall burlap bag doesn't make for a good souvenir, only a handful of Ruperts are even in museums or private collections today. In addition to examples in the National World War II Museum in New Orleans and the Merville Bunker Museum, Caen Memorial, and Omaha Beach Memorial in Normandy, an original Rupert was sold at auction for £2,500 in 2017.