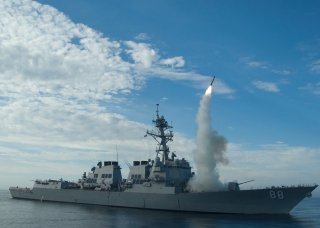 The Tomahawk, SM-6, and SM-3 are merely a few of the U.S. Navy’s operational ship-launched weapons that are now arming cruisers and destroyers built with a Vertical Launch System (VLS), a key technology built to accommodate and fire innovative weapons from built-in mini-silos integrated into the warships.

These Mk 41 launchers have proven reliable through combat testing, while also demonstrating an ability to adapt to modernized weapons. Will this technology soon incorporate hypersonic and other next-generation ship-fired weapons? The Navy is now working with its industry partners on innovations intended to supplement and extend beyond the existing VLS.

One particular offering is called EJECT, a Northrop Grumman technology engineered to support hypersonic missiles and other emerging technologies. Northrop Grumman developers refer to the existing VLS as a capable, “elegant” system, yet offer a supplemental solution capable of supporting a new generation of weapons needed to respond to an emerging threat environment.

Emerging threats continue to generate a need for larger and more energetic or explosive weapons, given that today’s enemies have weapons that are longer-range, more precise, and increasingly capable of attacking a wider envelope of threats. For example, enemy weapons, such as China’s DF-21 and DF-26 ballistic missiles, may increase the need for surface ships to operate at a greater distance from their targets. This is the circumstance Northrop Grumman is hoping to address.

“The current surface ship launch technology is at its limit, and this is where Eject technology comes in. Systems need to reach farther and faster. There's been a long-term trend of missiles getting larger and more energetic to address this need. And we don't see this trend ending anytime soon,” Roy Pascal, senior program manager at Northrop Grumman, told The National Interest in an interview.

Pascal explained some of the key technologies woven into Northrop Grumman’s innovative technology and the new margin of difference it may provide:

“If you were to imagine launching a large missile off a ship, the thermal loads from the booster become immense and very difficult to manage. The missile releases this tremendous plume, which contains all kinds of damaging particulates, which then impacts the launcher; the ship’s deck; and any electronics in the area, for example, radars. Those sorts of things can get fouled with these particles. These plumes can be 100 feet in length and are very damaging. As you strive to launch larger, more powerful missiles, that plume gets worse. So fundamentally EJECT technology addresses these shortcomings,” said Pascal.

The key result of this technology is that there becomes little to no constraints upon missile size or energy due to the launcher, because, as Pascal explained, the boosters are not ignited until well above the platform.

“The plume impacts are greatly reduced, which is why Northrop Grumman believes that EJECT technology is the right technology for the future fleet. The plume impacts are greatly reduced and the plume lasts for a shorter duration of time impacting the platform. Though it is worth pointing out, we're not advocating replacement for the existing VLS system,” Pascal explained.

The technology’s intent is to not only present near-term options for the Navy but also approach the development of EJECT with a modular, open-architecture technical framework to enable evolving and consistent modernization over time. For instance, Northrop Grumman engineers are exploring the prospect of different canister or launcher shapes to, as Pascal explained, “optimize for whatever payload you are shooting.”

“EJECT technology canisters are typically cylindrical. And while existing VLS canisters are rectangular, it doesn't have to be constrained.  We've looked at trapezoidal shaped canisters, for example. The point being is that you can adapt and optimize for whatever payload you're shooting,” Pascal said.

A modular approach is engineered with a set of interfaces and technical standards (such as common IP protocol) to enable interoperability and continued system maturation as new technological breakthroughs occur in the future. Adaptability is the approach’s conceptual core.

The operational concept behind EJECT is grounded in a firm belief that the Navy needs a different launcher to improve lethality and flexibility for future Navy surface ships. In a broader sense, Northrop Grumman’s weapons innovations are intended to support the Navy’s Distributed Maritime Operations strategy to support longer-range, more lethal attacks across disaggregated yet heavily networked forces.