Meet The Lada-Class: Russia's Most Dangerously Quiet Submarine Ever 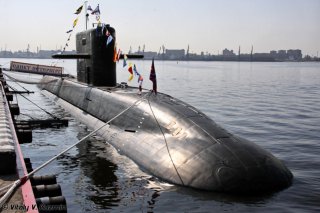 The venerable Rubin Design Bureau is the largest of Russia’s submarine design firms. It’s the oldest too—nearly 120 years old and counting. Design teams there have designed the vast majority of the nuclear submarines deployed by the Soviet Union—and is now coming up with something new and potentially revolutionary. Meet the new Lada-class, perhaps one of the quietest submarines in the world.

The new Lada-class utilizes an efficient teardrop shape for the hull, an industry-standard design that is aerodynamically efficient. When a submarine hull more or less free of protuberances, holes, divots, or other shapes or markings that can cause turbulence in the water and create detectable noise, than the hull is considered “clean.”

And the Lada-class hull appears to be smooth—and quite clean.

What is perhaps most revolutionary about the design is the propulsion system. In an apparent first for the Russian Navy, the Lada-class uses a hydrogen-oxygen fuel cell that generates electricity for the propellers.

This system is not a battery, like what is typically seen on diesel-electric submarines, where diesel generators charge batteries, but rather a chemical reaction that generates electricity, although the Lada-class does carry diesel generators as well. Importantly, it is considerably quieter than diesel-electric submarines, as there is no loud, clanking engine that emits noise, just a calm, quiet chemical reaction.

The company website describes some of the features of the Amur 950, the export version of the Lada-class:

“Acoustic signature of the Amur 950 submarine is several times less compared to Kilo class submarines which are currently considered to be the most silent in the world. The submarine is equipped with electronic warfare systems of new generation based on the recent hi-tech solutions. The provision is made for the boat to be fitted with an air-independent propulsion plant with electrochemical generators to considerably increase submerged endurance and cruising range. The plant with stock of reagents is located in a special compartment module, which can be incorporated into the submarine during construction or repair / refit.”

Again, a simple chemical reaction inside a fuel cell would likely be orders of magnitude quieter than both a purely diesel-electric or nuclear-powered submarine, a strong advantage in deep water games of Marco Polo.