Meet Russia's New Lada-Class Submarine: The Next 'Stealth' Threat to the U.S. Navy? 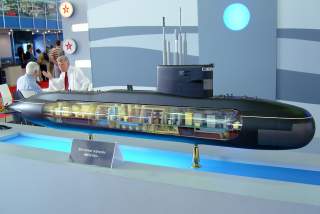 The second Lada-class submarine has been laid down and is set to undergo a series of trials over 2019, according to Commander in Chief of the Russian Navy Vladimir Korolyov.

Russian news outlet RT has obtained and published just under a minute of footage commemorating the occasion. The clip features several close-up shots of the submarine-- Kronstadt-- afloat, in motion, and sitting in a floating dock.

Kronstadt was introduced last year as the herald of a new era in Russian submarine design. As United Shipbuilding Corporation President Viktor Chirkov put it, “this new submarine allows us to move forward in executing the President’s orders concerning the construction of Russia’s new, modern submarine fleet.”

This sense of urgency in pushing out the Lada-class (Project 677) line comes into perspective considering the current state of the Russian fleet. A great swathe of Russia’s submarine roster is occupied by the aging, Soviet Kilo class that the Lada is meant to replace.

What separates the Kilo line from its Lada-class successor?

At first glance, nothing that would suggest a clear generational leap. Improved stealth characteristics and new sonar radars are among the most apparent improvements, but these minor tweaks could have just as easily been worked into a modernized Kilo line without the need to launch a new class. Meanwhile, the submarine-launched 3M-54 Kalibr cruise missiles serving as the centerpiece of Lada’s weapons suite are fully compatible with current Kilo-class vessels.

As previously discussed by The National Interest, the Lada class is defined by one core feature: an Air Independent Propulsion (AIP) system that purportedly generates half the system noise of a diesel-electric powered Kilo submarine. According to Lada engineers, other AIP benefits include reduced displacement (vessel weight) of around 25 percent and smaller crews. But after eleven years of development, Russian engineers have struggled to develop and implement Lada’s hydrogen-oxygen AIP that converts diesel fuel into hydrogen energy.

But the first Lada vessel, Saint Petersburg, arrived with a standard diesel-electric engine and has since been repurposed as a testbed for future submarine research and development. Unlike its Saint Petersburg counterpart, Kronstadt will be transferred to the Russian Navy after its trial period; however, it too runs on a diesel-electric engine rather than AIP technology. The manufacturer, Rubin Central Design Bureau for Marine Engineering, has clarified that future Lada submarines will be laid down with a proprietary AIP system. It remains to be seen how-- or if-- AIP will be implemented on the heels of these initial setbacks, with the next Lada release scheduled for 2021.

Russian military experts agree that Project 677 cannot escape the shadow of the Kilo class and become the fresh face a modernized Russian submarine fleet without its AIP system. This is apparently why the Kremlin has begun to hedge their bets, supplementing the Lada project with a with a small Kilo modernization program expected to yield two new submarines in 2020.

But what if AIP integration proves unfeasible, perhaps due to some combination of cost and quality-control issues?

With the Borei and Yasen projects submarine projects aggressively competing for a slice of Russia’s naval budget, a “deep” Kilo modernization may prove to be a cost-effective short term solution while the Russian Navy either re-conceptualizes the Lada project or conceives a different line to succeed the Kilo class.