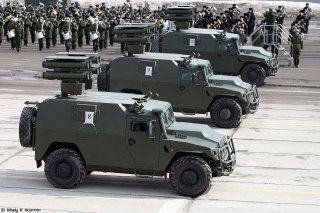 During the Second World War, elite paratroopers were used by both sides to drop deep behind enemy lines. Paratroopers proved crucial for the Allies during the D-Day landings, but the subsequent Operation Market Garden into German-occupied Netherlands has been described as going "A Bridge Too Far." British Airborne units in the Netherlands met fierce opposition from German armored units. As noted in the movie, based on Cornelius Ryan’s eponymous book, it was hard to fight enemy armor with rifles and machine guns.

Paratroopers of the era needed something that packed a bit more punch. The Soviet Union sought to support its paratroopers during the Cold War by developing armored vehicles designed for paradrops.

The Soviet Union introduced the BMP-1 infantry fighting vehicle in 1966. It was a new type of armored personnel carrier that provided mechanized infantry squads with the firepower to take on tanks and entrenched ground troops. The 14.6-ton BMP-1 packs a machine gun, an anti-tank missile launcher for sniping tanks at long range, and a 73-millimeter low-pressure cannon. Soviet designers took the same formidable armament package and placed it onto the much smaller and lighter aluminum-hulled BMD-1 – the Boyevaya Machine Desanta (Airborne Combat Vehicle).

The Russian military has continued to see the merits of an airborne-dropped armored fighting vehicle. This week, the state-owned conglomerate Rostec announced that the latest Kornet-D1 air-droppable self-propelled anti-tank missile system has entered the final stage of firing tests.

"The High Precision Weapons Group has switched to the final stage of firing tests and the vehicle is also undergoing laboratory and road tests," Rostec said in a statement, reported Russian state-backed news agency TASS.

The latest platform is based on the chassis of the BMD-4M airborne infantry fighting vehicle already supplied to the Russian Army's Airborne Force. It will be equipped with the Kornet anti-tank missile system that was engineered by the Shipunov Design Bureau of Instrument-Making – part of the High Precision Weapons Group – and was designed to strike tanks and other armored targets including vehicles outfitted with reactive armor.

The Kornet-D system is also capable of striking aerial targets. The missiles, which are directed by a laser beam, has a firing range has been extended to 10 km – while previous versions have an engagement range of 5.5 km. The Kornet-D1 will also be capable of striking two different targets at a time and delivering automatic fire.

The Kornet-D1 has actually been developed for two types of carriers: a wheeled chassis of the Tigr-M armored vehicle and the tracked platform of the BMD-4M airborne infantry fighting vehicle. The Kornet-D1 has been engineered for anti-tank squads of the Airborne Force's artillery.

In addition to being able to be dropped deep into enemy territory, the lighter BMD-4M is also significantly lighter than Russia's main battle tanks, which could be ideal in dealing with the mud that has proved a problem for some of the heavier vehicles.