Is Mud Delaying a Russian Invasion of Ukraine? 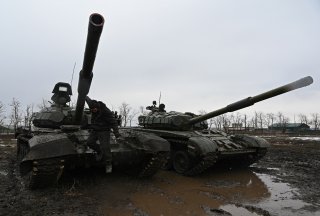 Signs are emerging that Russia may be rethinking or delaying an invasion of Ukraine. In addition to fears of crippling sanctions from the West and strong resolve from NATO members, perhaps it is the mud.

Muddy conditions have long been a problem for those who have dared to invade Russia over the centuries. From the Mongols to the Nazis, many armies have been bogged down during the "Rasputitsa" – the Russian term for the late fall and early spring seasons of the year when travel on unpaved roads across the vast open plains becomes difficult.

Perhaps Russia doesn't want to be the latest victim claimed by the "Rasputitsa" and the "time without roads."

Images of Russian tanks struggling in mud in the Rostov region, near the southeastern border with Ukraine, were shared on social media over the weekend. Nearly a dozen tanks, including older T-72s, could be seen in the deep mud. The situation appeared so bad that a construction digger was brought in to help free the Russian armor.

According to American estimates, the ground in Ukraine would be at "peak freeze" around Feb. 15 – the same day that Moscow announced some forces were returning to their bases.

While the mud could give pause to the Russian military official, the leaked video could be even more worrisome for western officials.

As Task & Purpose reported, Russian armor, including the T-90 main battle tank (MBT) are actually lighter than the American and NATO counterparts. The Russian tanks are better designed to operate in such conditions. The T-90 tips the scales at around forty-six tons, a bit lighter than the fifty-four-ton American M1 Abrams; and significantly lighter than Germany's Leopard 2A6, a true heavyweight at sixty-two tons.

"The Russian military trains in all types of weather­their training cycles extend all year round, so they do have some familiarity with shifting ground conditions," Dara Massicot, a senior policy researcher with the Rand Corporation, who specializes in Russian defense matters, told Foreign Policy earlier this month.

Russian military analysts have also bragged that "a thaw can only stop Western tanks," but even in the winter it seems that the ground isn't hard enough for tanks to move. However, modern Ukraine has far more paved roads than it did during past invasions, including the Nazi invasion in 1941, would have been able to use.

It may be too early to tell if the "Rasputitsa" maintains the peace, but no one should underestimate the power of Eastern Europe's mud.