Meet Russia's Tu-22M3M Backfire Bomber: Everything We Know So Far 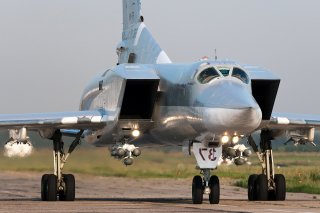 Russia is upgrading some of its Tu-22M Backfire bombers with new engines and weapons, potentially enhancing their ability to strike American carrier groups.

It's a blast from the past. But American military planners shouldn’t panic.

"During the Cold War, the Soviet missile-armed Backfire bomber represented one of the most serious threats to U.S. Navy carrier strike groups," Mark Schneider, an analyst with the National Institute for Public Policy, wrote in Proceedings, the professional journal of the U.S. Naval Institute.

"The recently improved Russian version of the Backfire, the Tu-22M3M, represents enhanced capability in virtually every area except stealth," Schneider noted.

"Backfire bombers routinely fly more than 3,100 miles to strike targets in Syria," Schneider wrote. "The Tu-22M3M should have significantly longer range because TASS reports its new NK-32-02 engine is the same used in the new Tu-160M2 heavy bomber, which Russian deputy defense minister Yury Borisov said will increase its range by approximately 600 miles."

A 3,700-mile endurance, roughly translating into an 1,850-mile range, could allow the upgraded Backfires to strike targets in the mid-Atlantic. With new weapons, the farther-flying Tu-22M3Ms could pose a new threat to American ships and other targets.

"The Backfire weapon upgrade is quite impressive, enhancing the bomber’s capabilities against both land targets and surface ships," Schneider noted. "In addition to the new land-attack missiles (the Kh-101 and Kh-555, according to Russian press), there reportedly will be at least two long-range ultrahigh-speed dual-capable (nuclear and conventional) missiles with land-attack and anti-ship capability."

"This is important," Schneider pointed out, "because the [U.S.] Department of Defense has said the United States currently has no defense against hypersonic missiles."

But there are reasons to be skeptical of the M3M's purported capabilities and Schneider's alarm.

For one, observers long have overestimated the Backfire's endurance. Most famously, in the 1970s the U.S. Air Force assumed the Tu-22M was an intercontinental bomber capable of striking the United States from bases in Russia over a distance of more than 4,000 miles, translating into an 8,000-mile round trip.

Journalist Bill Sweetman among others proved the Air Force wrong by estimating the Backfire's dimensions and calculating how much fuel it could carry. "Everyone thought it was equivalent to the U.S. Air Force’s Rockwell B-1 and had a similar range [of around 6,000 miles without refueling]," Sweetman wrote decades later.

"But based on the fuzzy photos at hand, the graph paper and the Cambridge [calculator] disagreed. The Backfire had room for only about 50 tons of fuel, about two-thirds what everyone thought."

Russia later confirmed Sweetman's conclusion that the Backfire wasn't a long-range strategic bomber, but a medium bomber whose main mission was lobbing missiles at American warships in the eastern Atlantic.

NATO routinely staged fighter jets in Iceland in order to intercept Backfires and other bombers flying toward the Atlantic from bases in northern Russia. The northern Russian city of Murmansk lies 1,500 miles from Iceland's capital Reykjavik. In 2006 the U.S. military finally ended fighter deployments to Iceland.

The most recent upgrades might extend the Backfire's reach, but probably not by much.  For one, the type's bombing raids over Syria might give a false impression of its endurance. There were reports that some Tu-22Ms staged from an Iranian air base for their missions over Syria. It's just 870 miles from Tehran to Damascus.

The Tu-22M3 has a probe for mid-air refueling, potentially allowing the type to top off its fuel tanks multiple times during a single mission. The U.S. Air Force's own B-1, B-2 and B-52 bombers routinely refuel several times in order to strike targets in the Middle East from their bases in the central United States.

Upgrades could extend the useful service life of the Tu-22M3 and compel the U.S. Navy to alter its own defensive plans, especially if Russia succeeds in equipping the bomber with a hypersonic anti-ship missile.

But the Backfire never possessed very impressive range. And even in its upgraded form, it still is just a medium-range bomber. It can't now and likely won't ever be able reliably to strike targets in the mid-Atlantic. An American carrier probably would have to sail past Iceland toward the Russia before a Tu-22M3M Backfire could attack it.