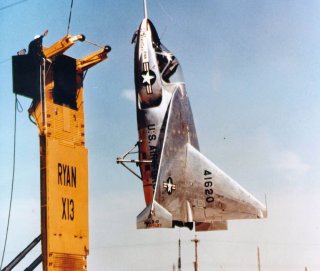 The Navy thought that this plane could be the next best fighter for aircraft carriers.

After the Second World War, the U.S. Navy looked for ways to maximize aircraft carrier usefulness. During the war, carriers had been invaluable, especially in the Pacific Theater. There, they had launched thousands of airplanes skyward for both the United States and Japan.

Carriers were somewhat limited in capacity, however. Long flight decks took up space that could potentially be used otherwise. If planes could take off straight up—vertically rather than horizontally—more planes could be put onto aircraft carriers, increasing combat effectiveness.

On land, such aircraft could be dispersed over a wide area, and would not have been limited to airports and airfields. During the beginning of the Cold War, military planners assumed that the opening hours of the next European war would involve the use of nuclear weapons targeting enemy airfields. A squadron of aircraft that didn’t need a runway would thus have been spread out over a wider area, providing some protection from a first nuclear strike.

Designing a Vertical Takeoff and Landing plane, or VTOL for short, sounded simple, but was difficult in practice. Today, VTOL jets like the F-35B or the earlier Harrier Jump Jet are able to direct their exhaust downwards and create thrust that lifts their respective airframes into the air. Before that, aircraft designers opted for a tail-sitter design.

A tail-sitter design sounds just like it sounds—instead of resting on landing gear, tail-sitters rest on their tail assembly, with nose cone pointed up to the sky. This naturally necessitated a strengthened tail to support the weight of the plane without crumpling. Though there had been attempts to make tail-sitting VTOL airplanes before, they were propeller-driven and obsolete compared to jet fighters. So aircraft designers made a jet engine tail sitting VTOL plane.

The Ryan X-13 Vertijet was designed as a high-speed interceptor, though in the prototype stage the Vertijet was subsonic. The Vertijet benefitted from weight savings due to having no landing gear. Combined with its vertical takeoff position, the Vertijet could have in theory, attained altitude faster than other jets, an ideal quality for an interceptor.

The plane used a delta wing mated to the top of the fuselage and a large tail assembly. A fairly squat plane, the Vertijet had a small bubble canopy that provided good visibility. One of the drawbacks inherent to the design was landing, which was done with the pilot looking over his shoulder, in much the same was that a car is parallel parked.

The Vertijet was controlled by an early form of engine thrust vectoring, in which the jet’s exhaust nozzle was able to control the direction of thrust. There were also small nozzles on the outside of the wings that provided additional stability.

Though the Vertijet design was workable, one of its drawbacks was in landing. Landing on the ground was awkward enough, but landing on a moving aircraft carrier—in both fair and bad weather—would have been very difficult. This limited the usefulness of the jet, and the pool of pilots that would be able to fly it, as only very experienced pilots could handle the complex landing and takeoff maneuvers required to fly the jet. The jet was never produced beyond the prototype stage.