Meet The Stolen Russian Space Shuttle that Flew Only Once 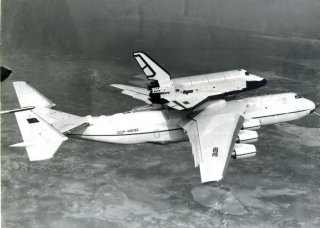 The Soviet Union wanted their own space shuttle — and eventually built something eerily reminiscent of NASA’s space shuttle. Its performance was similar to that of the space shuttle as well. So why did it only have three hours of flight time?

Soviet suspicions of the American space program reached perhaps their most dubious crescendo after the space shuttle program's first successful mission, STS-1, in April of 1981.

The first American orbiter, Columbia, like the other nearly identical orbiters that came after it, were able to carry a substantial payload up into orbit — just over 55,000 pounds, depending on how far into orbit the orbiter’s destination was.

It was the fear of this payload capacity that the Military-Industral Commission, or VPK, played into. Vladimr Smirnov, the head of the VPK. Smirnov allegedly mentioned this payload capability specifically in a letter to Soviet leader Brezhnev:

“Smirnov, from VPK, in his regular report to Brezhnev, mentioned at the end of his report: the Americans are intensively working on a winged space vehicle,” according to a 1991 history of the program printed in “Kuranty,” a Moscow magazine. “Such a vehicle is like an aircraft. It is capable, through a side maneuver, of changing its orbit in such a way that it would find itself at the right moment right over Moscow, possibly with dangerous cargo. The news disturbed Leonid Illyich [Brezhnev] very much. He contemplated it intensively and then said, ‘We are not country bumpkins here. Let us make an effort and find the money.’”

The Soviet space program was not doing particularly well. Early Soviet orbiter programs had gone in fits and starts, culminating with a reusable plane/orbiter, the MiG-105, a tiny spacecraft that had long been out of production.

Although the Soviet space program was top-notch — staffed with some of the best minds in the Soviet Union — their orbiter program was light years behind the Americans. They needed some help ‘catching up’ and so turned to a powerful and experienced ally — the VPK.

Know as a conduit of information to the United States, the VPK had helped before in gathering documents and information related to the French-British joint Concorde venture, which had resulted in the incredibly similar-looking Tupolev Tu-144.

“From the mid-1970s through the early 1980s, NASA documents and NASA-funded contractor studies provided the Soviets with their most important source of unclassified material in the aerospace area. Soviet interests in NASA activities focused on virtually all aspects of the space shuttle. Documents acquired dealt with airframe designs (including the computer programs on design analysis), materials, flight computer systems, and propulsion systems. This information allowed Soviet military industries to save years of scientific research and testing time as well as millions of rubles as they developed their own very similar space shuttle vehicle.”

The report also mentions how various Soviet agencies — including the KGB — had earmarked hundreds of thousands of dollars for information on the US space program.

The one functioning orbiter that resulted from all this stolen data — the Buran — looks strikingly similar to its American counterpart. The nose is virtually the same, as are the chines along the wings. The color scheme is quite similar, as is the tail assembly.

Soviet engineers were quick to point out that the Buran was more capable, in reality, the two aircraft are so similar, American orbiters were able to dock at Mir, the short-lived Russian space station with minimal modifications.

The Buran completed only one flight in its short lifetime, completing two orbits around the earth in one three-and-a-half-hour unmanned flight in 1988.

The Buran was a victim of the fall of the Berlin Wall. A lack of funding meant that vague and expensive space projects were to be axed. It was also a casualty of weather.

The Buran fell victim to a storm while attached to its rocket boosters in a space display at the Baikonur Cosmodrome in Kazakhstan.

During the storm, heavy wind and rain damage the structure housing the space display, causing the roof to collapse onto the Buran, destroying it. Sadly, the Buran never recovered.

While some mockups and uncompleted airframes are located in various museums, only one functioning craft was ever built. For now, at least, there are no more orbiters in Russia.