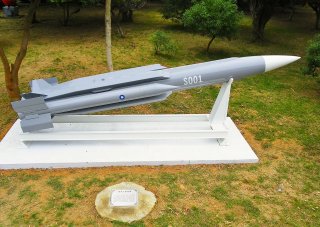 The tiny island republic cannot compete with China militarily—except with this one missile.

The vast majority of Taiwan’s missiles are rather short range and essentially defensive in nature. The tiny island republic is about 180 kilometers, or around 110 miles from the Chinese coast, and their missiles tend to fall into one of two categories: anti-ship missiles or short-range ballistic missiles. In fact, Taiwan has only two missiles that can reach across the Taiwan strait to the Chinese coast, the Wan Chien, and the Hsiung Feng IIE which have an approximate 240 and 600 kilometer range respectively.

These smaller-range missiles are designed for one purpose and one purpose only: to repulse attacks from China via the Taiwan Strait. This wide assortment of missiles that Taiwan has at the ready includes several U.S.-supplied models as well. Taiwan boasts both TOW and Javelin anti-tank missiles as well as the Hellfire surface-to-air missile.

Though the majority of Taiwan’s missiles are decidedly more defensive in nature given their shorter range, they were nevertheless developed in relative secrecy to not upset China, nor Taiwan’s patron the United States—which is also true of the Yun Feng.

Very little is actually known about the Yun Feng. Missile development probably started in or around 2012, and the project is said to have cost Taiwanese taxpayers around $27 million.

What is known is that the missile is a surface-to-surface missile with a conventional warhead that is likely 225 kilos, or about 500 pounds and can fly supersonically thanks to a ramjet engine that gets up to speed via an integrated rocket booster.

This strategic asset is specifically designed to strike targets in China’s northern and central regions, many hundreds of kilometers away from the Chinese coast—and quite possibly as far away as Beijing. Though the standard Yun Feng is thought to have a 1,200 kilometer range, an extended-range version of the missile may have a 2,000 kilometer range and probably comes in semi armor-piercing, fragmentation, and high-explosive variants.

Though Yun Feng testing is apparently still ongoing, the lion’s share of the missile’s development is likely already done. It remains to be seen where exactly in Taiwan the Yun Feng will be deployed, how many of them will be produced, or what their targets will be. What is certain however—is that they beef up Taiwan’s offensive capabilities—possibly enough to hinder or slow down a Chinese invasion.