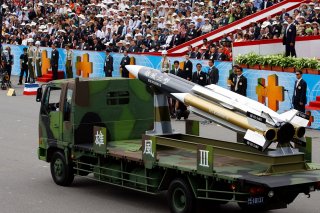 The key to Taiwan’s deterrent strategy is it’s missile program, as Taiwan lives on China’s doorstep. China is Taiwan’s number one security concern. Taiwan walks a fine line between keeping tensions with China low, while ensuring security via a credible weapons capability.

Historically, this has meant Taiwan’s missiles tend to be more defensive in nature, though more recent missile innovations can strike deeper into mainland China with more precision than their predecessor missiles.

The Hsiung Feng III is the latest of the Hsiung Feng missile family and was initially developed in 1994 as Taipei’s answer to growing militancy and technological ability from Chinese warships.

Hsiung Feng III is supersonic, and uses solid-fuel propellant as a booster, and liquid fuel to power a ramjet when flying supersonically. As it was originally conceived of as an anti-ship missile, it’s range is rather limited and is estimated to be in the 120 to 150 kilometer range, or about 75 to 90 miles.

The Hsiung Feng III’s detonation device is rather unique, and uses a “smart fuse designed to direct most of the explosive energy downward once it has detected that the missile is inside the target ship’s hull, maximizing damage.”

The Hsiung Feng IIE has a solid-fuel booster, and a liquid-fuel turbojet. It reportedly has an accuracy of 15 meters CEP—that is to say, 50 percent of missiles fired would be 15 meters or closer to the target point (around 50 feet). It carries a semi-armor-piercing high explosive or fragmentation warhead.

Because of the novel land-attack ability, the Hsiung Feng IIE development may have harmed a deal with Washington to buy 66 F-16C/Ds Taiwan had wanted to purchase.

The Yun Feng missile is currently under development and unlike most of Taiwan's missile assets, it was designed from inception to strike land-based targets well inside mainland China. Unfortunately little is known publicly about the missile.

Like the Hsiung Feng IIE, the Sun Feng is believed to have a semi-armor-piercing high-explosive or fragmentation warhead and will likely have a 1,200 to 2,000 kilometer range (around 745 to 1,200 miles).

Although Taiwan would be unlikely to win a major conflict with China, it plays a defensive game. Taiwan’s objective is not to ensure victory against China, but to ensure that the cost of winning will be so great that a conflict never takes place. Taiwan’s missile collection has, at least thus far, achieved just that.